November 17, 1800: The Senate Convenes in Washington

A late fall storm snarled travel up and down the east coast, so Senators trying to reach the District of Columbia from their homes in time for the new session experienced frustrating delays. Heavy snow even forced cancellation of the welcoming parade, but on November 17, 1800, following a ten-year stay in Philadelphia, the Senate of the Sixth Congress met for the first time in the new Capitol Building. 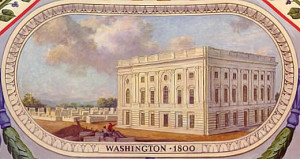 Work on the Ca…pitol had begun seven years previously, but construction proved to be so expensive that by 1796 the building’s commissioners decided to first construct only the Senate wing.
When the Senate convened in the ground-floor room (now restored as the old Supreme Court chamber), only fifteen of the necessary seventeen members answered the quorum call. Some third-floor rooms remained incomplete, and there was no heat, but the new building was ready to receive the Senate, the House, the Supreme Court, and the Library of Congress.

Four days later, the Senate achieved a quorum and, with the House, notified President Adams that Congress awaited any communication he might wish to make. The following day John Adams arrived in the cold, crowded, leaky (but elegant) Senate chamber, and congratulated the Congress on their new seat of government and “on the prospect of a residence not to be changed.”

He added, optimistically, “Although there is some cause to apprehend that accommodations are not now so complete as might be wished, yet there is great reason to believe that this inconvenience will cease with the present session.”

As President Adams continued with his address the chilled congressmen had ample time to contemplate the unfinished Capitol and its rustic surroundings. Many fondly recalled Philadelphia’s “convenient and elegant accommodations,” while a New York senator volunteered that the city was not so bad.

To make Washington perfect, it needed only “houses, cellars, kitchens, well informed men, amiable women, and other little trifles of this kind.”