Mrs. Carrie Nation appeared in the principal role in a sensational scene at the White House today. Her request to see the president being refused, she became violent and had to be taken from the executive offices by two police officers. As she was being: escorted from the building she shouted at the top of her voice, gesticulating violently: “I am going to 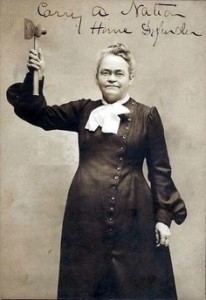 pray for a prohibition president and we will have one—one who will represent the people and not the distillers and brewers. You may put me out of the building, but if a brewer of liquor were here he would have been admitted at once.”

Accompanied by a young newspaper man, Mrs. Nation called at the executive offices and asked to see President Roosevelt. She was attired in a worn black silk dress and wore a closely fitting black velvet bonnet. She gave her card to the venerable door keeper, who, recognizing the name, immediately proffered her an autograph album, in which she inscribed the following: “Carrie A. Nation, your loving home defender. “Vote for prohibition of the liquor cause.”

While awaiting an answer to her request, Mrs. Nation said she wanted to see the president about several matters. “I understand he carried a dive full of liquors on his western trip; that he smoked cigarettes on the steps of the capitol at Topeka; that his flag has on it a coat of arms. Are these things so?” Assured she had been misinformed, she replied: “Oh, well, I want to see him anyway and have a talk with him.”

Presently she was informed that the president could not see her. “Well, that is funny,” she cried out, remarking on the number of United States senators and representatives who were passing in and out of the president’s office. “I see a lot of men going in and out of his office. I should like to know why they can see the president and we mothers and sisters of the country can’t get near him. I want an explanation of that, and I’m going to have it.”

Mrs. Nation went direct to the capitol after leaving the White House, and appeared in the senate gallery a few minutes before the senate was called to order at noon. She was soon discovered and surrounded by page and messenger boys, and until prohibited by the senate officials did a thriving business in selling her cards with a tiny hatchet attached. She took a seat well to the front in the ladies’ public gallery. She announced her intention to make a speech to the senate but when told that she would not be allowed to do so she acquiesced readily and took her departure.

She went to the Marble room and talked with Senator Cockrell. Mrs. Nation complained sharply of her expulsion from the White House and said she did not know why she had been so treated. “I did nothing to deserve to be put out,” she said, “for I want it understood that I am a lawabiding woman.” She had been absent from the gallery about ten minutes when she reappeared at one of the doors of the ladles’ gallery and, raising her right hand far above her head, she shouted In a loud and clear tone: “Saloons are anarchy: saloons are treason and conspiracy.”

She swung her arm around her head and again shouted: “Saloons are anarchy!” She was preparing to go on, when a doorkeeper caught her and pushed her out of the door.