Bobby Kennedy’s mother, Rose, wrote at the time of his birth: “Even the most enthusiastic parent must feel less excitement about ‘another baby’”. Bobby was the seventh child born to Joe and Rose Kennedy. He was a gentle and generous child – “I don’t know where he got that,” remarked his father. 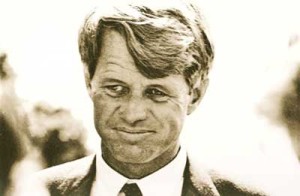 His elementary school teachers remembered him as “a nice freckle-faced kid… he needed no special handling.” At summer camp, his councilor noted “his progress has been fair. He shines in swimming and sailing. He is a boy who needs plenty of encouragement.” Another noted “Bob is erratic. At times he is as good as any boy in the tent, but at other times he is quite diffident.”
He was always having an accident – running into a glass door and gashing his head, or having hot tar thrown in his eye by another boy.

“What I remember most vividly about growing up was going to a lot of different schools, always having to make new friends, and that I was very awkward. I dropped things and fell down all the time. I had to go to the hospital a few times for stitches in my head and my leg. And I was pretty quiet most of the time. And I didn’t mind being alone. – I was the seventh of nine children and when you come from that far down you have to struggle to survive”.

His father was away for most of his boyhood, in Washington and then in London. As a teenager, Bobby got shipped off to St. Paul’s School in Concord NH, but that lasted only a month or so. His Mother then moved him to a good Catholic prep school, Portsmouth Priory, near Newport, Rhode Island.

“I just got out of about 3 hours of praying in chapel, and so feel like a saint. Our retreat starts Thursday so I’m certainly going to be doing a lot of praying this week.” Math was his best subject; History and Christian Doctrine were his worst. The headmaster wrote his father, “Bob’s habit of not being neat is receiving considerable attention from all his masters.”

He tried out for the football team and the hockey team. “I don’t play hockey very well but I’ve gotten much better since I started this year.” He became manager of the hockey team, and vice-commodore of the school yacht club. His mother wanted him to go to dancing school in Providence. Bobby wasn’t so keen -“I don’t think it would be worth going way up to Providence for dancing as it is quite far away and I wouldn’t be able to play hockey.”

Bobby had just turned sixteen when Pearl Harbor was attacked. He travelled to Palm Beach for Christmas.

The next year he transferred to Milton Academy, his 6th school in 10 years. On his last day of school his math teacher made a small speech to the class. “Two great things” had just happened. “Rommel was surrounded in Egypt and Kennedy has passed a math test.”

His older brothers, Joe and John were stars. But Bobby “was neither a natural athlete nor a natural student nor a natural success with girls and had no natural gift for popularity. Nothing came easily for him. What he had was a set of handicaps and a fantastic determination to overcome them.”

Source: Robert Kennedy and His Times by Arthur M. Schlesinger