This last summer I wanted to go to Alaska to explore some fine busy glaciers that are working on the flanks of Mt. St. Elias and the mountains about Cook’s Inlet and Prince William’s Sound. But I could not get away early enough for such extended explorations as would be required there; and so I just rambled off for an easy six weeks’ saunter in the Sierra 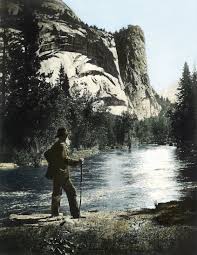 above Yosemite, and about the head-waters of the Tuolumne, and down the Grand Cañon of the Tuolumne to Hetch Hetchy and the sugar pine woods of the main forest belt.

On this ramble I was careful to note the results of the four years of protection the region had enjoyed as a park under the care of the Federal Government, and I found them altogether delightful and encouraging.

When I had last seen the Yosemite National Park region, the face of the landscape in general was broken and wasted, like a beautiful countenance destroyed by some dreadful disease. Now it is blooming again as one general garden, in which beauty for ashes has been granted in fine wild measure. The flowers and grasses are back again in their places as if they had never been away, and every tree in the park is waving its arms for joy. Only the few spots held as cattle ranches under private ownership continue to look frowzy and wasted; but the condition of even these has been greatly improved under protection from the sheep scourge. Lilies now swing and ring their bells around the margins of the forest meadows and along the banks of the streams throughout the lower and middle portions of the park. the broad tangles and beds of chaparral have put forth new shoots and leaves, and are now blooming again in all their shaggy beauty and fragrance, the open spaces on the slopes are covered with beds of gilias of many species and purple spraquea, monardella, etc.; while on the steeper slopes the driest friable soil, that was most deeply raked and dibbled by the hoofs of the sheep, has been replanted, mostly by a delicate species of gymnophytum, whose winged seeds were the first to reach those desolate places. soon, however, they will be followed by other plants to enrich the bloom; for in the work of beauty Nature never stops.

In the highlands of the park the tough sod of the glacier meadows was never wholly destroyed, but their delicate grasses were not allowed to bloom beneath the feet of the trampling sheep, and all the bright flowers that so charmingly enameled the close, smooth sod – gentians, daisies, ivesias, orthocarpus, bryanthus, etc. – vanished as if not a root or seed had been spared.

This year, I am happy to saw, I found these blessed flowers blooming again in their places in all the fineness of wildness – three species of gentians, in patches acres in extent, blue as the sky, blending their celestial color with the purple panicles of the grasses, and the daisies and bossy, rosy spikes of the varied species of orthocarpus and bryanthus – nearly every trace of the sad sheep years of repression and destruction having vanished.

Blessings on Uncle Sam’s blue-coats! In what we may call homeopathic doses, the quiet, orderly soldiers have done this fine job, without any apparent friction or weak noise, in the still calm way that the United States troops do their duty. Uncle Sam has only to say: “There is your duty,” and it is done.