The first spitting of snow—a flurry or squall—from out a gray or slate-colored cloud that came up from the west. This consisted almost entirely of pellets an eighth of an inch or less in diameter. These drove along almost horizontally, or curving upward like the outline of a breaker, before the strong and chilling wind. The plowed fields were for a short 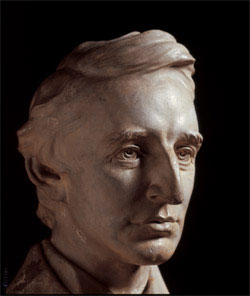 time whitened with them. The green moss about the bases of trees was very prettily spotted white with them, and also the large beds of cladonia in the pastures. They come to contrast with the red cockspur lichens on the stumps, which you had not noticed before. Striking against the trunks of the trees on the west side they fell and accumulated in a white line at the base. Though a slight touch, this was the first wintry scene of the season. The air was so filled with these snow pellets that we could not see a hill half a mile off for an hour. The hands seek the warmth of the pockets, and fingers are so benumbed that you cannot open your jack-knife. The rabbits in the swamps enjoy it, as well as you. Methinks the winter gives them more liberty, like a night.