A year before the Pilgrims landed in Massachusetts, thirty-eight colonists sailed from England aboard the ship Margaret. They were refugees from the poverty brought on by overpopulation and the decline of the woolen trade in the region of Berkeley in Gloucestershire. Some had tried to grow tobacco in England, but the Virginia Company, which 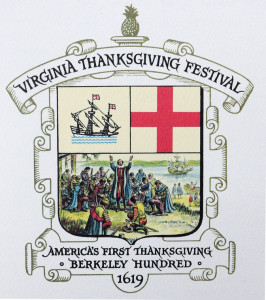 was hoping to develop tobacco plantations in the New World, successfully lobbied the king to ban tobacco agriculture in England for five years.

So the Berkeley group set out on a perilous two and a half month sea voyage for a new life in the wilderness. On the day they landed they gathered around their Captain Woodlief as he proclaimed “We ordaine that this day of our ship’s arrival, at the place assigned for plantation, in the land of Virginia, shall be yearly and perpetually kept holy as a day of Thanksgiving to Almighty God.”

Then the landing party–including a sawyer, a cooper, a shoemaker, a gunmaker, and a cook–set about constructing a storehouse and an assembly hall for the plantation along the James River that became known as the Berkeley Hundred.

The settlement struggled for the first years through the usual squabbling, harsh weather, crop failure, starvation, illness, and attacks from the indigenous population. It was abandoned briefly, but settled again.

The land was eventually purchased in 1691 by Benjamin Harrison III, attorney general of the colony, treasurer and speaker of the House of Burgesses. He died at age thirty-seven in 1710, leaving the property to his only son.

Benjamin Harrison V, who was born at Berkeley Plantation on December 13, 1730, signed the Declaration of Independence and served three terms as governor of Virginia.

His son, William Henry Harrison, also born at the plantation, was elected the ninth President of the United States. Just a month after his inauguration, however, Harrison died in office and was succeeded by his Charles City County neighbor, John Tyler.