I note from the press that on last Sunday afternoon, December 7, on the ABC television program College News Conference, you stated, among other things, that Senator Kennedy’s “father has been spending oodles of money all over the country and probably has a paid representative in every state by now.” 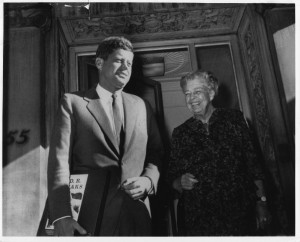 Because I know of your long fight against the injudicious use of false statements, rumors or innuendo as a means of injuring the reputation of an individual, I am certain that you are the victim of misinformation; and I am equally certain that you would want to ask your informant if he would be willing to name me one such representative or one such example of any spending by my father around the country on my behalf.

I await your answer, and that of your source, with great interest. Whatever other differences we may have had, I’m certain that we both regret this kind of political practice.

If my comment is not true, I will gladly so state. I was told that your father said openly he would spend any money to make his son the first Catholic President of this country, and many people as I travel about tell me of money spent by him in your behalf. This seems commonly accepted as a fact.

Building an organization is permissible but giving too lavishly may seem to indicate a desire to influence through money.