John T. Daniels worked at the Life Saving Station at Kill Devil Hills in Kitty Hawk on the Outer Banks of North Carolina. One December morning in 1903 he helped two young men from Ohio launch their flying machine off the dunes.

Daniels had never taken a picture before, but he snapped a picture of that first flight (which soon became famous), and he got a little tangled up in the struts… 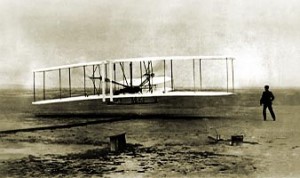 Here is his letter to a friend, written twenty years later, describing the events of that day:

I Don’t know very much to write about the flight. I was there, and it was on Dec the 17, — 1903 about 10 o’clock. They carried the machine up on the Hill and Put her on the track, and started the engine, and they through a coin to see who should take the first go, so it fell on Mr. Orval, and he went about 100 feet or more, and then Mr. Wilbur taken the machine up on the Hill and Put her on the track and he went off across the Beach about a half a mile or more before he came Down. He flew so close to the top of a little hill the he Pulled the Rudder off so we had to Bring her back to the camp, and it was there I got tangled up in the machine and she Blew off across the Beach with me hanging in it, and she went all to Pieces. It Didn’t Hurt me much I got bruised me some. They Packed up every thing and went home at Dayton. That ended the Day. I snapped the first Picture of a Plain that ever flew. They were very nice men and we all enjoyed Being out at the Camp with them mostly every Day.

That accident made me the first airoplane causiality in the world and I have Piece of the upright that I was holding on to when It fell.
Would be glad to Render any informattion at any time you need it.