December 18, 1936: The First Giant Panda Arrives in the America

President Theodore Roosevelt’s sons Theodore and Kermit had hunted and killed Panda bears in China, but no American had ever brought one back alive. The globe-trotting adventurer Bill Harkness, a Harvard man with a private income who had captured Komodo dragons in the Dutch East Indies, thought he would give it a try. 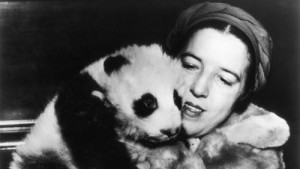 Two weeks after his marriage to socialite Ruth McCombs, Harkness headed off to China on a “panda” expedition. Unfortunately, before his expedition could get into the wilds, he died in Shanghai of throat cancer. He never saw a panda bear.

Upon hearing the news of her husband’s death, Ruth Harkness declared that she had “inherited an expedition.” She set sail from New York City in April of 1936, hosting a cocktail party in her stateroom as she set sail, with dozens of swells juggling highball glasses and cigarettes and teasing her about her far-fetched mission.

From New York, Ruth Harkness sailed through the Red Sea to ports in Ceylon, Singapore and Hong Kong before finally reaching Shanghai. In Shanghai she retrieved the equipment Bill had left behind in storage. She ordered that her husband’s sportswear, from woolen underwear to a fur-hooded army parka to hobnail boots, be tailored to fit her.

By November 9, she was camping high on a mountains near Tibet.
In the dense fog on the mountain, Harkness heard more than she could see. She heard a shout from ahead, then a musket. Her guide was yelling. Harkness caught up and gasped, “What is it?”

Harkness was afraid that a panda had been shot, but her guide reassured her. They stumbled on. From an old rotting tree, a baby panda whimpered. Her guide ran forward and retrieved a tiny panda cub and handed it to Harkness. As the three-pound black-and-white ball nuzzled her breast, she and Young realized they had to race back to base camp for milk and baby bottles.

On December 18, 1936, Ruth Harkness carried the first live panda onto U.S. soil. She had told the Chinese authorities she was transporting a small dog but, in fact, sh brought ashore a three-pound panda cub.

“Panda-monium” soon broke out. Throngs of reporters, photographers and cameramen recorded her arrival in San Francisco.

Ruth brought the panda back to New York. She named the cub “Su Lin”, which means “a little bit of something precious.” She kept her hotel windows kept wide open to the chilly air as she travelled “to preserve the native Tibetan climate” for the cub’s comfort.

Su Lin lived for a few months in Harkness’ New York apartment, was honored at the New York Explorers Club before eventually being sold to Chicago’s Brookfield Zoo, where he became its star attraction.