The Pilgrim and the Puritan… were men who did a great deal of work in the world. They had their faults and their – shortcomings, but they were not slothful in business and they were most fervent in spirit. They formed prosperous 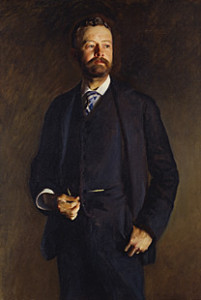 commonwealths and built on government by law and not of men. They carried the light of learning undimmed through the early years of settlement. They planted a school-house in every village, and fought always a good fight for ordered liberty and for human rights. Their memories shall not perish, for
“the actions of the just
smell sweet and blossom in the dust …”

The war for the Union and the issues springing from it have been settled. But all the time other questions have been growing up with the growth of the nation and are now coming to the front for decision. It is our duty to settle them, not only in the right way, but in a thorough American fashion.

By American I do not mean that which had a brief political existence more than 30 years ago. That movement was based on race and sect, and was therefore thoroughly un-American, and failed, as all un-American movements have failed in this country. True Americanism is opposed utterly to any political divisions resting on race and religion. To the race or to the sect, which as such attempts to take possession of the politics or the public education of the country, true Americanism says, Hands off!

The American idea is a free church in a free state, and a free and un-sectarian public school in every ward and in every village, with its doors wide open to the children of all races and of every creed. It goes still further, and frowns upon the constant attempt to divide our people according to origin or extraction. Let every man honor and love the land of his birth and the race from which he springs and keep their memory green. It is a pious and honorable duty.

As there are sentiments and beliefs like these to be cherished, so there are policies which must be purely and wholly American and to the “manner born” if we would have them right and successful.

True Americanism recognizes the enormous gravity of the social and labor problems which confront us. It believes that the safety of the republic depends upon well paid labor and the highest possible average of individual well-being. It believes that the right solution of this problem should be sought without rest and without stay, and that no device public or private of legislation or of individual effort, which can tend to benefit and elevate the condition of the great wage-earning masses of the country, should be left untried.

It sets its face rightfully against the doctrines of the Anarchist and the Communist, who seek to solve the social problems not by patient endeavor, but by brutal destruction. “That way madness lies,” – and such attempts and such teachings, barbarous and un-American as they are, must and will be put down with a strong and unflinching hand, in the name of the home and the church and the school and all that makes up civilization and the possibility of human progress.