It is with infinite pain and concern, that I transmit Congress the Inclosed Copies of Sundry Letters respecting the State of the Commissary’s department. If these matters are not exaggerated, I do not know from what cause, this alarming deficiency or rather total failure of Supplies arises; But unless more Vigorous exertions and better regulations take place in that line, and immediately, this Army must dissolve. 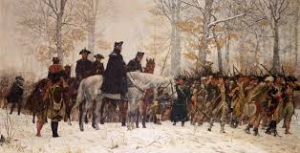 I have done all in my power, by remonstrating, by writing to, by ordering the Commissaries on this Head, from time to time; but without any good effect, or obtaining more than a present scanty relief. Owing to this, the march of the Army has been delayed upon more than one interesting occasion, in the course of the present Campaign, and had a Body of the Enemy crossed Schuylkill this Morning, as I had reason to expect from the intelligence I received at Four O’Clock last night, the Divisions which I ordered to be in readiness to march and meet them, could not have moved. It is unnecessary for me to add more upon the subject. I refer Congress to the Copies, by one of which they will perceive how very unfavorable also our prospect is, of having any considerable supplies of Salt Provisions for the ensuing Year. . . .

It would give me infinite pleasure to afford protection to every individual and to every Spot of Ground in the whole of the United States. Nothing is more my wish. But this is not possible with our present force. In all wars, from the nature of things, Individuals and particular places must be exposed. It has ever been and ever will be the case, and we have only to pity and to regret the misfortune of those, who from their situation are subject to ravage and depredation. These facts are evident and obvious to all, and if that system of conduct is pursued by an Army, which is most likely to give the most general and extensive security, it is all that can be done or expected from it. I assure you, Sir, no circumstance in the course of the present contest, or in my whole life, has employed more of my reflection or consideration than in what manner to effect this and to dispose of the Army during the present Winter.

Viewing the Subject in any point of light, there was choice of difficulties. If keeping the Field was thought of, the naked condition of the Troops and the feelings of Humanity opposed the measure: If retiring to the Towns in the interior parts of the State, which consistently with the preservation of the Troops, from their necessitous circumstances, might have been justifiable, the measure was found inexpedient because it would have exposed and left uncovered, a large extent of Country. If cantoning the Troops in several places, divided and distant from each other, then there was a probability of their being cut off, and but little prospect of their giving security to any part.

Under these Embarrassments, I determined to take post near this place, as the best calculated, in my Judgement to secure the Army, to protect our Stores and cover the Country; and for this purpose we are beginning to hut, and shall endeavour to accomplish it, as expeditiously as possible. …

I cannot divide the Army, not superior (from sickness and other causes equally painful when collected) to the Enemy’s force, into detachments contrary to every Military principle and to our own experience of the dangers that would attend it. If this is done, I cannot be answerable for the consequences.

My feelings lead strongly to Universal relief, but I have not the power to afford it. Nevertheless it has been and is still my intention, as soon as I have formed and secured this Camp to detach a small force to aid and countenance their Militia.

This is all it appears to me that can be done, and I hope their apprehensions for the greater part will prove rather imaginary than well grounded; tho’ I confess there are strong reasons to conclude the Enemy will not be remiss, in their acts of violence and injury there or any where else.