Philip Wells was a mixed-blood Sioux who served as an interpreter for the Army. He was there that Monday morning:

“I was interpreting for General Forsyth… The captured Indians had been ordered to give up their arms, but Big Foot 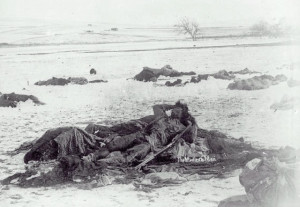 replied that his people had no arms. Forsyth said to me, ‘Tell Big Foot he says the Indians have no arms, yet yesterday they were well armed when they surrendered. He is deceiving me. Tell him he need have no fear in giving up his arms, as I wish to treat him kindly.’

Big Foot replied, ‘They have no guns, except such as you have found.’

Forsyth declared, ‘You are lying to me in return for my kindness.’

During this time a medicine man, gaudily dressed and fantastically painted, executed the maneuvers of the ghost dance, raising and throwing dust into the air. He exclaimed ‘Ha! Ha!’ as he did so, meaning he was about to do something terrible, and said, ‘I have lived long enough,’ meaning he would fight until he died. Turning to the young warriors who were squatted together, he said ‘Do not fear, but let your hearts be strong. Many soldiers are about us and have many bullets, but I am assured their bullets cannot penetrate us. The prairie is large, and their bullets will fly over the prairies and will not come toward us. If they do come toward us, they will float away like dust in the air.’

I turned to Major Whitside and said, ‘That man is making mischief,’ and repeated what he had said.

Whitside replied, ‘Go direct to Colonel Forsyth and tell him about it,’ which I did.

Forsyth and I went to the circle of warriors where he told me to tell the medicine man to sit down and keep quiet, but he paid no attention to the order. Forsyth repeated the order.

Big Foot’s brother-in-law answered, ‘He will sit down when he gets around the circle.’ When the medicine man came to the end of the circle, he squatted down.

A cavalry sergeant exclaimed, ‘There goes an Indian with a gun under his blanket!’ Forsyth ordered him to take the gun from the Indian, which he did.

Whitside then said to me, ‘Tell the Indians it is necessary that they be searched one at a time.’ The young warriors paid no attention to what I told them.

I heard someone on my left exclaim, ‘Look out! Look out!’ I saw five or six young warriors cast off their blankets and pull guns out from under them and brandish them in the air. One of the warriors shot into the soldiers, who were ordered to fire into the Indians.

I looked in the direction of the medicine man. He or some other medicine man approached to within three or four feet of me with a long cheese knife, ground to a sharp point and raised to stab me. He stabbed me during the melee and nearly cut off my nose. I held him off until I could swing my rifle to hit him, which I did. I shot and killed him in self-defense.

Troop ‘K’ was drawn up between the tents of the women and children and the main body of the Indians, who had been summoned to deliver their arms. The Indians began firing into ‘Troop K’ to gain the canyon of Wounded Knee creek. In doing so they exposed their women and children to their own fire. Captain Wallace was killed at this time while standing in front of his troops. A bullet, striking him in the forehead, plowed away the top of his head.

I started to pull off my nose, which was hung by the skin, but Lieutenant Guy Preston shouted, ‘My God Man! Don’t do that! That can be saved.’ He then led me away from the scene of the trouble.”