I was married to Ulysses S. Grant on the 22nd of August, 1848. The place of the wedding was on the corner of 4th and Cerre Streets, St. Louis and I had a beautiful wedding. Our family was a very old family. My father settled there years 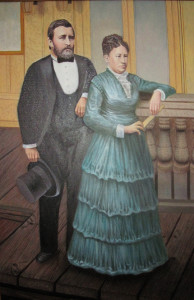 before and our friends were among the elite of the city, as it then was; and they were all present. My family thought the world of Ulysses at that time and everybody came to the wedding who had an invitation. I say this to let you know that the wedding was not the wedding of a poor family. It was modest, but everything was nice.

The General never talked war matters with me at all. He wrote very little about the war, even after the taking of Vicksburg. I don’t remember that he wrote me any letter of exultation of joy. He was so sorry for the poor fellows who were opposed to him that he never could exult over any victory. He always felt relieved, of course, and glad that it seemed to promise to shorten the war, but he never exulted over them. After Vicksburg, he placed his headquarters at Nashville in order that I might be with him. The first day that I arrived there he was out and did not return until quite late in the evening, and then he told me with a great deal of sorrow that he would be obliged to go to the front, and he was afraid he might be away for some length of time.

Accordingly he was gone five days and during this time the Rebel women began to talk about me and the General and said the General had fled as soon as he could. When he came back I told him this, just to bother him, and he said, “Why, you can tell those ladies that I put my headquarters here just on purpose to have you with me.” During these five days I had been going out with the ladies of Nashville to the hospitals and doing what I could to aid the poor fellows there and the General came back. I began to tell him about it and present petitions and messages from these men which they had asked me to do. The General stopped me at once.

He said, “Now, my dear, I don’t want to hear anything at all about that. I don’t want you to come to me with any of these tales of the hospitals or any of these petitions or messages. I have all I can bear up under outside my home and when I come to you I want to see you and the the children and talk about other matters. I want to get all the sunshine I can.” When he sent for me, I was boarding at Louisville because I did not care to live in a hotel and it was not particularly pleasant for me at father Grant’s house.

My brother Fred Dent thought the world of Ulysses and when he returned from West Point he kept writing and telling us about Ulysses Grant. He told me Ulysses was the finest boy he had ever known. He said, ‘I want you to know him, he is pure gold. I want you to meet him.”

I don’t think his letters from the Mexican War would be particularly valuable, nor the letters which he wrote me during the Civil War. They were mainly relating to things personal or domestic. I cannot bear to read them now, they bring it all back to me. I was with him a good deal of the time during the Civil War. I was with him at Corinth and after Vicksburg I joined him at Nashville for awhile. After moving his camp from Nashville to City Point I went East and remained with him until the close of the war.