One day in October, 1860, Apache Indians raided John Ward’s ranch south of Tucson, plundered his house, kidnapped his son Mickey Free, and ran off with all of his livestock. 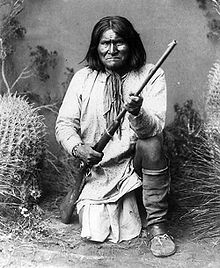 It wasn’t until the end of January that Second Lieutenant George Bascom was ordered to attempt to retake the boy and the stolen stock.  54 men mounted on mules arrived at Apache Pass on February 3rd and camped in Siphon Canyon; the Apache Chief Cochise’s camp was set in Goodwin Canyon, a short distance away.

Cochise, who had seen the soldiers pass through, proceeded to their camp accompanied by a half-brother, two nephews, two squaws and a boy, to greet the visitors.

Lt. Bascom invited Cochise and his party into his tent.  Once inside, Bascom demanded the return of the boy and the stock.  Cochise replied that he didn’t have them. Bascom again demanded the return, Cochise again replied that he did not have them – given time, he could perhaps find out who had taken them and return them, but Bascom replied no – Cochise would be held as hostage.

Bascom’s soldiers had surrounded the tent with bayonets fixed.  Cochise suddenly unsheathed a knife, slashed the tent and ran up the hill amid a hail of rifle fire. Cochise escaped, but the rest of his party was captured.

The next day, Bascom broke camp and rode to the Overland Mail Station. When he arrived Cochise appeared on a hill above the station, wanting to talk about the captive Indians. Three men went up the hill to talk to Cochise.  After a few minutes, a fight broke out. Cochise attempted to capture the three – two escaped, but one was shot from behind, and another mistakenly shot in the head by a soldier. The third was taken captive.

Just then a wagon train entered Apache Pass at the west end, and was ambushed.  The wagons were burned – two more white men were taken captive, and eight Mexicans were chained to the wagon wheels, turned head down, and a fire built under their heads.

About dark the East-bound stage entered Apache Pass and was fired upon – the first volley hit the lead mule – the driver was wounded in the leg, a passenger was wounded in the chest – The conductor jumped from the coach and cut out the dead animal; They all climbed back aboard and drove full speed downhill to the station. The Indians had pulled the planking from a small bridge over a gully; when the coach reached it, the mules jumped the gap and the coach somehow slid over the remaining planks and made it into the station.

On the evening of the 8th, one of the captives was brought into sight of the station and a stick was planted in the ground with a message attached.  When the Indians departed a soldier was sent up the hill and retrieved the message.  The soldiers sent messengers to Tucson and to Fort Buchanan to send for help.

In the meantime, Lt. Bascom, needing water, divided his herd of mules and sent one half to the spring for watering.  The Apaches ambushed this party. Moses Lyon was killed, two men were wounded and Bascom lost half of his animals.

A rescue column set out from Fort Breckenridge with Surgeon Irwin in command and marched the 65 miles to Dragoon Spring in 24 hours. Arriving at Apache Pass they encountered Apaches with a herd of horses and cattle, and after a chase of about seven miles and a short fight captured the animals.

On February 17th, Cochise’s rancheria was found and set afire.  About a mile west of the station a short distance from the road, the bodies of the four captive Americans were discovered, littered with lance holes, badly mutilated and unrecognizable.

After finding the bodies, the soldiers wanted revenge. On February 19th, they marched their Apache hostages to the graves of Cochise’s victims, and found some oak trees close by the graves.

Travellers passing by noted the bodies of the six hostages still hanging from the trees the following July.