The track was one and one-half mile long, carved out of Mt. Van Hoevenberg and surrounded by the Adirondack wilderness. Built specifically for the 1932 Winter Olympic Games held in Lake Placid, the course was radically different from its European counterparts – it was longer, steeper, and featured a more pronounced drop in curves. This track ran 2366 meters long with 26 curves, a vertical drop of 228 meters, and an average grade of 9.6%. 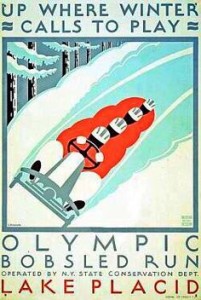 Much competition was expected from the German World Champions, Hanns Kilian and Sebastian Huber. However, the first heat went to the Swiss bob, which gained nearly six seconds in a single run. With much of the snow on the track gone, the second run was much faster. When the local favorites, Hubert and Curtis Stevens, two brothers from Lake Placid who had won the North American and AAU championships at the same track, launched their sled, they needed a great run. The Stevens brothers didn’t disappoint – they broke the track record to trail by 3 seconds after the first day.

Overnight warming caused the track to become even faster, and the Swiss leaders broke the record again in the third run. However, the Stevens brothers, cheered on by a crowd of 10,000, topped that by nearly 4 seconds.

The difference with just one run left was now 0.45 seconds. The Americans went first in the last descent, improving on their previous record once more and lowering it by two full seconds. Capadrutt and Geier went all out, and recorded their best time of the competition, but remained two seconds slower than the Stevens brothers.

After the American team’s medals, bobsledding captivated the country’s interest, and U.S. teams dominated the sport until 1956.