In 1750 Philadelphia was the fastest growing city in the colonies, and would soon become the second largest English-speaking city in the world. The docks and wharves along the Delaware River teemed with activity as ships loaded up flour, meat and lumber while other vessels brought in European-manufactured goods and wines. 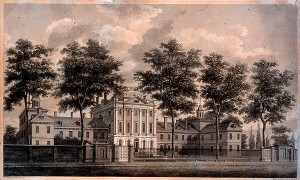 Although the majority of the population was neither extremely wealthy nor extremely poor, the number of immigrant settlers who were “aged, impotent or diseased” was growing rapidly. Philadelphia was becoming “a melting pot for diseases, where Europeans, Africans and Indians engaged in free exchange of their respective infections.”

Dr. Thomas Bond had studied medicine in London and Paris (at the famous hospital, the Hotel-Dieu). When Bond returned to Philadelphia he as appointed Port Inspector for Contagious Diseases. Dr. Bond and Benjamin Franklin were long-standing friends. Bond was a member of Franklin’s Library Company and helped establish the American Philosophical Society and the Academy of Philadelphia, which evolved into the University of Pennsylvania.

Around 1750, Bond “conceived the idea of establishing a hospital in Philadelphia for the reception and cure of poor sick persons.” When Bond approached Philadelphians for support they asked him what Franklin thought of the idea.

Bond hadn’t approached his friend because he thought it was out of Franklin’s line of interest, but he soon turned to Franklin. After hearing the plan, Franklin became a subscriber and strong supporter.

Franklin organized a petition and brought it to the Pennsylvania Assembly. The petition stated that although the Pennsylvania Assembly had made many compassionate and charitable provisions for the relief of the poor, a small provincial hospital was necessary. After a second reading on January 28, the petitioners were directed to present the Assembly with a bill to create a hospital. Presented a week later, the bill encouraged the Assembly to establish a hospital “to care for the sick poor of the Province and for the reception and care of lunaticks.”

On February 11, 1753 the first patients were admitted to Pennsylvania Hospital. The motto “Take care of him and I will repay thee” was chosen and the image of the Good Samaritan adorned the hospital seal.

Benjamin Franklin was pleased: “I do not remember any of my political manoeuvres, the success of which gave me at the time more pleasure…”