Never was such a skating scene presented before, as was seen in the Hippodrome last Saturday night.

Just imagine a sheet of artificial ice covering a space of 16,000 square feet with hundreds of merry skaters gliding over 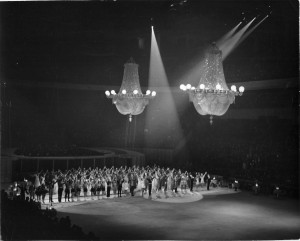 its glassy surface, dressed in the fantastic costumes of King Carnival and as happy as larks in spring time, while the seats from which the thousands used to watch the sports of the arena provided by Barnum are well filled with a merry throng of ladies and gentlemen who appear to enjoy the antics of the masked skaters on the ice almost as much as they do themselves.

Add to this the light of thousands of gas jets, hundreds of colored lights, and the flashes of numerous calcium lights of different colors, and the strains of music from Gilmore’s serenade band and you have a skating scene the equal of which was never seen in this country or any other.

And it will be long remembered by all who participated in or witnessed it, and in the years to come when there are artificial skating rinks all over the country, the young ladies and gentlemen that were present will tell their children how they skated at the carnival at Gilmore’s garden on the first large sheet of ice made by mortal man.

During the evening Mr. Robert Gibson, who is well known by many skaters of this city and country, made a neat little speech in which he complimented Mr. Rankin upon the success of his process of making artificial ice, after which he read and then presented to Mr. Rankin the following testimonial which was richly deserved:

“We the undersigned take pleasure in testifying to the splendid success of your process of making artificial ice for skating rinks and we feel that you have successfully surmounted all difficulties in bringing into use a new application never before perfected. While many doubted the feasibility of making and maintaining so large a body of artificial ice in a temperature above freezing, we who have been in almost daily attendance for the past four weeks are now convinced of your ability to maintain indefinitely this large sheet of ice of 16,000 square feet in the finest possible manner and condition for skating, and in a temperature above freezing as has been demonstrated daily by your reproduction of a glassy surface since your opening at Gilmore’s garden, and we who have enjoyed the privilege of skating upon the first artificial ice rink ever produced in America and of standing upon the largest cake of ice ever made by man and extend to you our heartiest congratulations on the magnificent success you have achieved

The sport was kept up until midnight when the lights were turned down and the carnival and the skating season were over at Gilmore’s garden.