A little thunder and lightning late in the afternoon. I see two flashes and hear two claps. 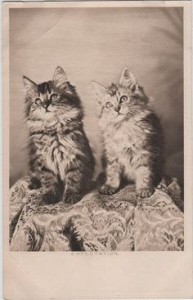 A kitten is so flexible that she is almost double; the hind parts are equivalent to another kitten with which the fore part plays. She does not discover that her tail belongs to her till you tread upon it.

How eloquent she can be with her tail! Its sudden swellings and vibrations! She jumps into a chair and then stands on her hind legs to look out the window; looks steadily at objects far and near, first turning her gaze to this side then to that, for she loves to look out a window as much as any gossip. Ever and anon she bends back her ears to hear what is going on within the room, and all the while her eloquent tail is reporting the progress and success of her survey by speaking gestures which betray her interest in what she sees.

Then what a delicate hint she can give with her tail! passing perhaps underneath, as you sit at table, and letting the tip of her tail just touch your legs, as much as to say, I am here and ready for that milk or meat, though she may not be so forward as to look round at you when she emerges.

Only skin-deep lies the feral nature of the cat, unchanged still. I just had the misfortune to rock on to our cat’s leg, as she was lying playfully spread out under my chair. Imagine the sound that arose, and which was excusable; but what will you say to the fierce growls and flashing eyes with which she met me for a quarter of an hour thereafter?

No tiger in its jungle could have been savager.