UNDER the shadow of Boston State House, turning its back on the house of John Hancock, the little passage called Hancock Avenue runs, or ran, from Beacon Street, skirting the State House grounds, to Mount Vernon Street, on the 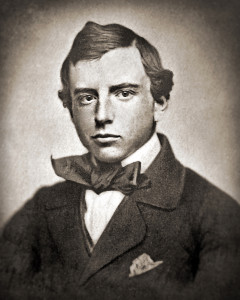 summit of Beacon Hill; and there, in the third house below Mount Vernon Place, February 16, 1838, a child was born, and christened later by his uncle, the minister of the First Church after the tenets of Boston Unitarianism, as Henry Brooks Adams.

Had he been born in Jerusalem under the shadow of the Temple and circumcised in the Synagogue by his uncle the high priest, under the name of Israel Cohen, he would scarcely have been more distinctly branded, and not much more heavily handicapped in the races of the coming century, in running for such stakes as the century was to offer; but, on the other hand, the ordinary traveller, who does not enter the field of racing, finds advantage in being, so to speak, ticketed through life, with the safeguards of an old, established traffic. Safeguards are often irksome, but sometimes convenient, and if one needs them at all, one is apt to need them badly. A hundred years earlier, such safeguards as his would have secured any young man’s success; and although in 1838 their value was not very great compared with what they would have had in 1738, yet the mere accident of starting a twentieth-century career from a nest of associations so colonial,–so troglodytic–as the First Church, the Boston State House, Beacon Hill, John Hancock and John Adams, Mount Vernon Street and Quincy, all crowding on ten pounds of unconscious babyhood, was so queer as to offer a subject of curious speculation to the baby long after he had witnessed the solution. What could become of such a child of the seventeenth and eighteenth centuries, when he should wake up to find himself required to play the game of the twentieth? Had he been consulted, would he have cared to play the game at all, holding such cards as he held, and suspecting that the game was to be one of which neither he nor  any one else back to the beginning of time knew the rules or the risks or the stakes? He was not consulted and was not responsible, but had he been taken into the confidence of his parents, he would certainly have told them to change nothing as far as concerned him. He would have been astounded by his own luck. Probably no child, born in the year, held better cards than he. Whether life was an honest game of chance, or whether the cards were marked and forced, he could not refuse to play his excellent hand. He could never make the usual plea of irresponsibility. He accepted the situation as though he had been a party to it, and under the same circumstances would do it again, the more readily for knowing the exact values. To his life as a whole he was a consenting, contracting party and partner from the moment he was born to the moment he died. Only with that understanding–as a consciously assenting member in full partnership with the society of his age–had his education an interest to himself or to others.

As it happened, he never got to the point of playing the game at all; he lost himself in the study of it, watching the errors of the players; but this is the only interest in the story, which otherwise has no moral and little incident. A story of education–seventy years of it–the practical value remains to the end in doubt, like other values about which men have disputed since the birth of Cain and Abel; but the practical value of the universe has never been stated in dollars. Although every one cannot be a Gargantua-Napoleon-Bismarck and walk off with the great bells of Notre Dame, every one must bear his own universe, and most persons are moderately interested in learning how their neighbors have managed to carry theirs.