A little transaction of mine, as innocent an one as I ever entered into, and where an improper construction was never less expected, is making some noise, I observe, in your city. I beg leave to explain it to you, because I mean to ask your agency in it. The last year, the Agricultural Society of Paris, of which I am a member, having had a plough presented to them, which, on trial with a graduated instrument, did equal work with half the force of their best ploughs, they thought it would be a benefit to mankind to communicate it. They accordingly sent one to me, with a view to its being made known here, and they sent one to the Duke of Bedford also, who is one of their members, to be made use of for England, although the two nations were then at war. 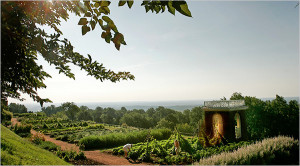 By the Mentor, now going to France, I have given permission to two individuals in Delaware and New York, to import two parcels of Merino sheep from France, which they have procured there, and to some gentlemen in Boston, to import a very valuable machine which spins cotton, wool and flax equally. The last spring, the Society informed me they were cultivating the cotton of the Levant and other parts of the Mediterranean, and wished to try also that of our southern States. I immediately got a friend to have two tierces of seed forwarded to me. They were consigned to Messrs. Falls and Brown of Baltimore, and notice of it being given me,

I immediately wrote to them to re-ship them to New York, to be sent by the Mentor. Their first object was to make a show of my letter, as something very criminal, and to carry the subject into the newspapers. I had, on a like request, some time ago, (but before the embargo) from the President of the Board of Agriculture of London, of which I am also a member, to send them some of the genuine May wheat of Virginia, forwarded to them two or three barrels of it. General Washington, in his time, received from the same Society the seed of the perennial succory, which Arthur Young had carried over from France to England, and I have since received from a member of it the seed of the famous turnip of Sweden, now so well known here.

I mention these things, to shew the nature of the correspondence which is carried on between societies instituted for the benevolent purpose of communicating to all parts of the world whatever useful is discovered in any one of them. These societies are always in peace, however their nations may be at war. Like the republic of letters, they form a great fraternity spreading over the whole earth, and their correspondence is never interrupted by any civilized nation. Vaccination has been a late and remarkable instance of the liberal diffusion of a blessing newly discovered.

It is really painful, it is mortifying, to be obliged to note these things, which are known to everyone who knows anything, and felt with approbation by everyone who has any feeling. But we have a faction to whose hostile passions the torture even of right into wrong is a delicious gratification. Their malice I have long learned to disregard, their censure to deem praise.

But I observe, that some republicans are not satisfied (even while we are receiving liberally from others) that this small return should be made. They will think more justly at another day: but in the mean time, I wish to avoid offence.

My prayer to you, therefore, is, that you will be so good, under the inclosed order, as to receive these two tierces of seed from Falls and Brown, and pay them their disbursements for freight, &c. which I will immediately remit you on knowing the amount. Of the seed, when received, be so good as to make manure for your garden.

When rotted with a due mixture of stable manure or earth, it is the best in the world.