In the late 1930s, Kozo Nishino had been the commander of a Japanese tanker taking on crude oil at the Ellwood oil field near Santa Barbara California. On the way up the path from the beach to a ceremony welcoming him and his crew, Nishino had slipped and fell into a prickly-pear cactus. Workers on a nearby oil rig broke into loud guffaws at the sight 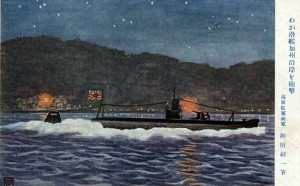 of the commander having cactus spines plucked from his posterior.

Then and there, the humiliated Nishino swore to get even.

Ten weeks after the attack on Pearl Harbor, Nishino got his chance for revenge.

Just five minutes after President Roosevelt started a fireside chat to the nation a Japanese submarine rose out of the sea just north of Santa Barbara, on the California coast and pumped thirteen shells into tidewater refinery installations. For about twenty minutes the submarine kept a position 2,500 yards offshore to deliver the shots from its 5½-inch guns. The shells did minor damage to piers and oil wells, but missed the gasoline plant, which appears to have been the aiming point.

The shots seemed designed to punctuate the President’s statement that “the broad oceans which have been heralded in the past as our protection from attack have become endless battlefields on which we are constantly being challenged by our enemies.”

The first news of the attack led to the dispatch of pursuit planes to the area, and subsequently three bombers joined the attempt to destroy the raider, but the AAF commanders were reluctant  to assign larger forces to the chase, believing that the raid was meant to divert attention from a major air task force which would hurl its planes against a really significant target, and a strict state of readiness against renewed attacks was imposed.