Identity of Aircraft Veiled in Mystery; No Bombs Dropped and 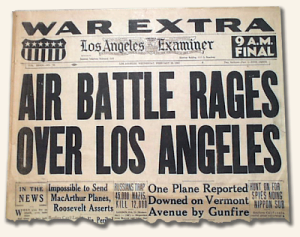 Overshadowing a nation-wide maelstrom of rumors and conflicting reports, the Army’s Western Defense Command insisted that Los Angeles’ early morning blackout and anti-aircraft action were the result of unidentified aircraft sighted over the beach area. In two official statements, issued while Secretary of the Navy Knox in Washington was attributing the activity to a false alarm and “jittery nerves,” the command in San Francisco confirmed and reconfirmed the presence over the Southland of unidentified planes.

Relayed by the Southern California sector office in Pasadena, the second statement read: “The aircraft which caused the blackout in the Los Angeles area for several hours this a.m. have not been identified.”

Insistence from official quarters that the alarm was real came as hundreds of thousands of citizens who heard and saw the activity spread countless varying stories of the episode. The spectacular anti-aircraft barrage came after the 14th Interceptor Command ordered the blackout when strange craft were reported over the coastline. Powerful searchlights from countless stations stabbed the sky with brilliant probing fingers while anti-aircraft batteries dotted the heavens with beautiful, if sinister, orange bursts of shrapnel.

The city was blacked out from 2:25 to 7:21 am after an earlier yellow alert at 7:18 pm was called off at 10:23 pm. The blackout was in effect from here to the Mexican border and inland to the San Joaquin Valley. No bombs were dropped and no airplanes shot down and, miraculously in terms of the tons of missiles hurled aloft, only two persons were reported wounded by falling shell fragments. Countless thousands of Southland residents, many of whom were late to work because of the traffic tie-up during the blackout, rubbed their eyes sleepily yesterday and agreed that regardless of the question of how “real” the air raid alarm may have been, it was “a great show” and “well worth losing a few hours’ sleep.”

The blackout was not without its casualties, however. A State Guardsman died of a heart attack while driving an ammunition truck, heart failure also accounted for the death of an air raid warden on duty, a woman was killed in a car-truck collision in Arcadia, and a Long Beach policeman was killed in a traffic crash enroute to duty.

Much of the firing appeared to come from the vicinity of aircraft plants along the coastal area of Santa Monica, Inglewood, Southwest Los Angeles, and Long Beach.