During my stay in Dublin, I took occasion to visit the huts of the poor in its vicinity—and of all places to witness human misery, ignorance, degradation, filth and wretchedness, an Irish hut is pre-eminent. It seems to be constructed to promote the very reverse of everything like domestic comfort. 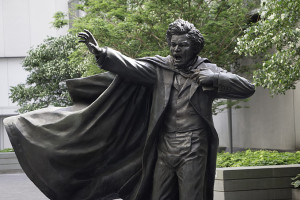 If I were to describe one, it would appear about as follows: Four mud walls about six feet high, occupying a space of ground about ten feet square, covered or thatched with straw—a mud chimney at one end, reaching about a foot above the roof—without apartments or divisions of any kind—without floor, without windows, and sometimes without a chimney—a piece of pine board laid on the top of a box or an old chest— a pile of straw covered with dirty garments, which it would puzzle any one to determine the original part of any one of them—a picture representing the crucifixion of Christ, pasted on the most conspicuous place on the wall—a few broken dishes stuck up in a corner—an iron pot, or the half of an iron pot, in one corner of the chimney—a little peat in the fireplace, aggravating one occasionally with a glimpse of fire, but sending out very little heat—a man and his wife and five children, and a pig. In front of the door-way, and within a step of it, is a hole three or four feet deep, and ten or twelve feet in circumference; into this hole all the filth and dirt of the hut are put, for careful preservation. This is frequently covered with a green scum, which at times stands in bubbles, as decomposition goes on.

Here you have an Irish hut or cabin, such as millions of the people of Ireland live in. And some live in worse than these. Men and women, married and single, old and young, lie down together, in much the same degradation as the American slaves.

I see much here to remind me of my former condition, and I confess I should be ashamed to lift up my voice against American slavery, but that I know the cause of humanity is one the world over. He who really and truly feels for the American slave, cannot steel his heart to the woes of others; and he who thinks himself an abolitionist, yet cannot enter into the wrongs of others, has yet to find a true foundation for his anti-slavery faith.

But, to the subject. The immediate, and it may be the main cause of the extreme poverty and beggary in Ireland, is intemperance.
This may be seen in the fact that most beggars drink whiskey. The third day after landing in Dublin, I met a man in one of the most public streets, with a white cloth on the upper part of his face. He was feeling his way with a cane in one hand, and the other hand was extended, soliciting aid. His feeble step and singular appearance led me to inquire into his history. I was informed that he had been a very intemperate man, and that on one occasion he was drunk, and lying in the street. While in this state of insensibility, a hog with its fangs tore off his nose, and a part of his face! I looked under the cloth, and saw the horrible spectacle of a living man with the face of a skeleton.

Drunkenness is still rife in Ireland. The temperance cause has done much—is doing much—but there is much more to do, and, as yet, comparatively few to do it. A great part of the Roman Catholic clergy do nothing about it, while the Protestants may be said to hate the cause. I have been frequently advised to have nothing to do with it, as it would only injure the anti-slavery cause.

It was most consoling to me to find that those persons who were most interested in the anti-slavery cause in the United States, were the same that distinguished themselves as the truest and warmest advocates of temperance and every other righteous reform at home.