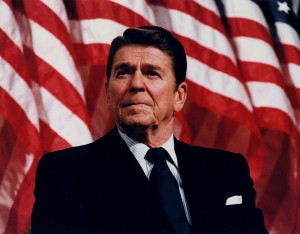 between respecting people as adults, each with a spark of greatness, and treating them as helpless children to be forever dependent; between a drab, materialistic world where Big Brother rules by promises to special interest groups, and a world of adventure where everyday people set their sights on impossible dreams, distant stars, and the Kingdom of God. We have the true message of hope for America.

In Year of Decision, 1846, Bernard DeVoto explained what drove our ancestors to conquer the West, create a nation, and open up a continent. If you take away the dream, you take away the power of the spirit. If you take away the belief in a greater future, you cannot explain America — that we’re a people who believed there was a promised land; we were a people who believed we were chosen by God to create a greater world.
…
And this is what we’re trying to do. Our critics are not pleased, but I hope we’ll be forgiven this small observation: The spendthrifts who mangled America with the nightmare of double-digit inflation, record interest rates, unfair tax increases, too much regulation, credit controls, farm embargoes, gas lines, no-growth at home, weakness abroad, and phony excuses about “malaise” are the last people who should be giving sermonettes about fairness and compassion.

Their failures were not caused by erratic weather patterns, unusual rotations of the moon, or by the personality of my predecessor. They were caused by misguided policies and misunderstanding human nature. Believe me, you cannot create a desert, hand a person a cup of water, and call that compassion. You cannot pour billions of dollars into make-work jobs while destroying the economy that supports them and call that opportunity. And you cannot build up years of dependence on government and dare call that hope.…

An opportunity society awaits us. We need only believe in ourselves and give men and women of faith, courage, and vision the freedom to build it. Let others run down America and seek to punish success. Let them call you greedy for not wanting government to take more and more of your earnings. …

An opportunity society for all, reaching for its future with confidence, sustained by faith, fair play, and a conviction that good and courageous people flourish when they’re free — this is the noble vision we share, a vision of a strong and prosperous America, at peace with itself and the world. Just as America has always been synonymous with freedom, so, too, should we become the symbol of peace across the Earth. I’m confident we can keep faith with that mission.

Fellow citizens, fellow conservatives, our time has come again. This is our moment. Let us unite, shoulder to shoulder, behind one mighty banner for freedom. And let us go forward from here not with some faint hope that our cause is not yet lost; let us go forward confident that the American people share our values, and that together we will be victorious.

And in those moments when we grow tired, when our struggle seems hard, remember what Eric Liddell, Scotland’s Olympic champion runner, said in Chariots of Fire: “So where does the power come from to see the race to its end? From within. God made me for a purpose, and I will run for His pleasure.”

If we trust in Him, keep His word, and live our lives for His pleasure, He’ll give us the power we need — power to fight the good fight, to finish the race and to keep the faith.

Thank you very much. God bless you and God bless America.