A severe thunderstorm formed over southeast Missouri in the early afternoon hours of March 18, 1925.

A tornado was spawned by the storm about three miles northwest of Ellington, Missouri, just after one o’clock that 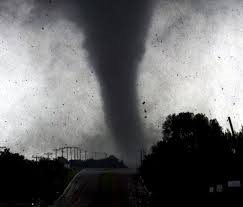 afternoon. The tornado lifted from the ground for a brief period of time just after touching down, typical of many, small tornadoes. But then it touched down again, and held the land with a vengeance and stayed on the ground.

The tornado barreled across southeast Missouri, southern Illinois and southwest Indiana at breakneck speed. Unrecognizable at times, the tornado turned into a huge black wall of debris that caught people off-guard. At times during its life, the tornado reached F-5 status with winds in excess of 300 miles per hour.

It traveled at an average ground speed of 62 mph (still a record) and travelled an incredible 73 mph from Gorham, Missouri, to Murphysboro. As the tornado passed by, a barograph trace at the Old Ben Coal Mine in West Franfort, Illinois, recorded the lowest pressure ever taken of 28.70.

It dissipated three and a half hours later about three miles southwest of Petersburg, Indiana. 695 people were dead and more than 2,000 were injured; 15,000 homes were destroyed in Missouri, Illinois, and Indiana.