There are some very good reasons why the Republicans have been out of office so long and haven’t been able to get back in control. 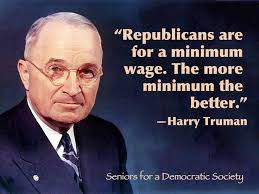 The first reason is that they were voted out in 1932 because they had brought the country to the brink of ruin. In the 1920’s the Republican administrations drew back in petrified isolation from our world responsibilities. They spent all their time trying to help the rich get richer, and paid no attention to the welfare of the workers and the farmers. All in all, they paved the way for the biggest economic smashup this country has ever seen.
That is the reason the Republicans were thrown out of office in 1932 and one of the very good reasons why they have been kept out ever since. People don’t want any more “Great Depressions.”

The second reason why the Republicans have been out of office for 20 years is that the Democratic Party has been giving the country good government. Instead of trying to build up the prosperity of the favored few, and letting some of it trickle down to the rest, we have been working to raise the incomes of the vast majority of the people. And we have been steadily expanding the base for prosperity and freedom in this country. The people have kept right on reelecting Democrats because we have been serving them well and they know it.

The third reason the Republicans have been kept out of power for years is because they have never been able to agree on a sensible program to put before the country. They have been on almost every side of every question, but they have seldom or never been on the right side.

In 1936 they said the New Deal was terrible and they were against it and all its works. And in the election that fall they just lost by a landslide.

In 1940 they admitted there might be some good in some parts of the New Deal, but they said you needed a Republican to run it. And they were overwhelmingly beaten again.

In 1944 the Republicans said the New Deal might have been good in its day, but it had gotten old and tired and it was no good any more. But the people didn’t agree, and the Republicans were snowed under once more.

Now in 1948 they said—well, as a matter of fact, by 1948 they were so sure of winning that they really didn’t bother to take a position on anything. And they got just exactly what they deserved—they got another good licking.

And by now the Republicans can’t figure out what to do. Every day you hear a new Republican theory of how to win the election of 1952. One theory they have is that they ought to come right out and say they are against all advances the country has made since 1932.

This is the kind of dinosaur school of Republican strategy. They want to go back to prehistoric times. Republicans of this school say: “Let’s stop beating about the bush—and let’s say what we really believe. Let’s say we’re against social security—and we’re against the labor unions and good wages—and we’re opposed to price supports for farmers—that we’re against the Government doing anything for anybody except big business.”