The founding fathers may have declared that “All Men are Created Equal” but it took the 13th Amendment (1865) to the U.S. Constitution to end the institution of slavery, the 14th Amendment (1868) to grant citizenship to former slaves, 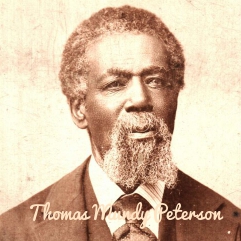 and the 15th Amendment (1870) to guarantee that all men, regardless of race or color, had the right to vote (women would have to wait another half century for the 19th Amendment).

Tom Peterson was born October 6, 1824 on the Mundy family farm in what is now Metuchen, New Jersey. His father worked for Ezra Mundy and both father and son adopted that last name from time to time. His mother, Lucy, was a manumitted slave of Andrew Bell in Freehold, New Jersey. Tom was born free thanks to his mother’s status and also New Jersey’s Gradual Emancipation act of twenty years before.

By 1828 the family had moved to Perth Amboy, New Jersey which had become an enclave of progressive idealists. Marcus and Rebecca Spring had established the Raritan Bay Union there, a sort of cross between a boarding school, utopian community, and artist’s colony. The Union attracted intellectuals and artists, including Angelina and Sarah Grimke and abolitionists and reformers like James Birney, Edward Palmer, and Caroline Kirkland. Bronson Alcott spent time there, and Henry David Thoreau surveyed the property.

Tom Peterson was working in the stables of one of the Union’s students, John Lawrence Kearny, when news of the passage of the Fifteenth Amendment arrived in Perth Amboy. Both Kearny and Marcus Spring encouraged him to go exercise the right of a free citizen. Regular elections were not scheduled until the fall, but the city was holding a special election to decide if they were going to revise their city charter or abandon it in favor of a township form of government.

This was an important vote – deciding how a free people should govern their selves. Some were appalled at the notion of a black man voting—one man tore up his ballot and vowed to not vote again for a decade—but many in the city were proud that their city had the first Negro voter under the Fifteenth Amendment.

Peterson voted to revise the existing charter—the side that prevailed—and was named as one of the committee tasked with doing just that.

In 1884 the citizens of Perth Amboy presented Thomas Peterson a medal. The back of the medal bears the words:

PRESENTED by CITIZENS
OF PERTH AMBOY N.J.
TO
THOMAS PETERSON
THE FIRST COLORED VOTER
IN THE U.S. UNDER THE
PROVISIONS OF THE
15TH AMENDMENT
AT AN
ELECTION HELD IN
THAT CITY
MARCH 31TH 1870

In New Jersey, March 31st is celebrated annually as Thomas Mundy Peterson Day to mark the right of all citizens to vote.