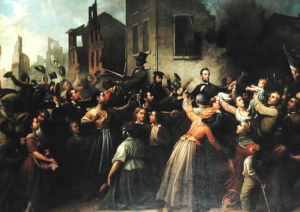 “The next day after our entry into the city, on passing out from Clay Street, from Jefferson Davis’s house, I saw a crowd coming, headed by President Lincoln, who was walking with his usual long, careless stride, and looking about with an interested air and taking in everything.

Upon my saluting he said: ‘Is it far to President Davis’s house?’ I accompanied him to the house, which was occupied by General Weitzal as headquarters. The President had arrived about 9 o’clock, at the landing called Rocketts, upon Admiral Porter’s flag-ship, the Malvern, and as soon as the boat was made fast, without ceremony, he walked on shore, and started uptown. As soon as Admiral Porter was informed of it he ordered a guard of marines to follow as escort; but in the walk of about two miles they never saw him, and he was directed by negroes.

At the Davis house, he was shown into the reception-room, with the remark that the housekeeper had said that the room was President Davis’s office. As he seated himself he remarked, ‘This must have been President Davis’s chair,” and, crossing his legs, he looked far off with a serious, dreamy expression.

At length he asked me if the housekeeper was in the house. Upon learning that she had left he jumped up and said, with a boyish manner, ‘Come, let’s look at the house!’

We went pretty much over it; I retailed all that the housekeeper had told me, and he seemed interested in everything. As we came down the staircase General Weitzel came, in breathless haste, and at once President Lincoln’s face lost its boyish expression as he realized that duty must be resumed.

President Lincoln replied that he did not wish to give any orders on that subject, but, as he expressed it, ‘If I were in your place I’d let ’em up easy, let ’em up easy. “