A girl named “Amonute,” was born in 1596 to an important family in the land now called Virginia.  Her family called her by the private name of “Matoaka”, but she became popularly known as “Pocahontas” which meant “playful one” 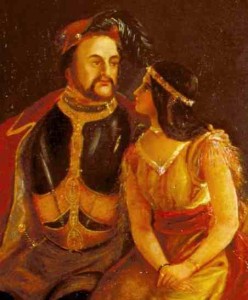 because of her frolicsome nature, and she was the daughter of the chief of the Powhatan nation, which had a population at the time of about 25,000 and included more than 30 tribes..

When the English arrived in Jamestown in 1607, Pocahontas was about eleven years old. That winter Captain John Smith was captured and brought to the capital of the Powhatan Chiefdom. When Smith was brought in front of the Chief of the Powhatan, two large stones were placed on the ground and Smith’s head was forcibly held on the stones.

Just as a warrior raised a club to smash in his brains, Pocahontas rushed in and placed her head upon his, and stopped the execution.

Thanks to the young girl’s intervention Smith was allowed to return to Jamestown along with gifts of food for the starving English. Pocahontas became a sign of peace to the English as she put them at ease with her antics, cart-wheeling through the settlement with the young English boys, as she accompanied the Indian envoys.

However relations between the two peoples soon deteriorated; Smith left Virginia and Pocahontas was not allowed to visit Jamestown anymore.

When she turned fourteen, Pocahontas married a young man Kocoum, who might have been one of her father’s bodyguards. It is not clear if she married for love or not, but her marriage was soon interrupted when Captain Samuel Argall hatched a plot to capture her and use her as leverage in the English colonists’ relations with the Powhatan.

Pocahontas was kidnapped and brought to Jamestown and put under the charge of Reverend Alexander Whitaker where she learned more of the English language, religion and customs. It was not an easy time, but during her religious instruction, Pocahontas met an attractive young widower, John Rolfe, who was known for introducing tobacco to the settlers in Virginia.

By all accounts, the two fell in love.

Powhatan was sent word that Pocahontas and Rolfe wanted to marry, and he consented and sent an uncle of Pocahontas’ to represent him and her people at the wedding. Kocoum, her first husband, realized divorce was inevitable.

In 1614, Pocahontas converted to Christianity and was baptized “Rebecca.” In April 1614, she and John Rolfe married. The Rolfes soon had a son named Thomas, and then traveled to England in 1616 on a delayed honeymoon excursion, their expenses paid by the Virginia Company of London.

Pocahontas, known as “Lady Rebecca Rolfe,” was accompanied by about a dozen Powhatan men and women. The party toured the country – Pocahontas attended a masque where she sat near King James I and Queen Anne. Eventually, the Rolfe family moved to Brentford, where Pocahontas again encountered Captain John Smith.

In March 1617, the Rolfes were ready to return to Virginia. They sailed down the Thames River, but Pocahontas got terribly sick just as they were about to set sail.

She was taken ashore in the town of Gravesend, where she died.
Pocahontas, aged about twenty-one, was buried at St. George’s Church on March 21, 1617.