April 7, 1818: Andrew Jackson plants the Stars and Stripes in Florida.

Andrew Jackson’s victory in the Battle of New Orleans determined once and for all that the Mississippi Valley would belong to the United States. But what about Florida? 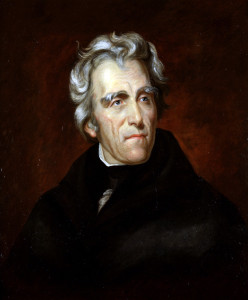 Florida was owned by Spain, but the British had designs… The Creeks and Seminoles were using it as a base to harass Georgia, and runaway slaves from the plantations of Georgia and South Carolina were escaping there. Assigned by President Monroe to stabilize the situation, Jackson wrote “Let it be signified to me through any channel that the possession of the Floridas would be desirable to the United States, and in sixty days it will be accomplished.”

On March 10, 1818, Jackson invaded Florida with 3000 volunteers and 2000 Indian allies. The troops first set out for two supply ships waiting at the mouth of the Apalachicola River near the Gulf of Mexico. By March 15th, they had reached the Negro Fort on the river where they re-provisioned, and then set out into the heart of Seminole territory.

Meanwhile, a small flotilla commanded by U.S. Navy Lieutenant Isaac McKeever sailed from New Orleans. When McKeever arrived in the bay of St. Marks on April 1, his ship, the Thomas Shields, flew a British flag.  The ruse fooled both the Spanish and the Indians, and McKeever was able to lure on board the Creek chieftains Francis the Prophet (or Hillis Hadjo) and Himollemico. The Indians thought they were being received by allies and expected to find ammunition and powder. Instead, Jackson had the two Creek leaders hung.

On April 7th, a day after arriving in St. Marks, Jackson seized the military fortress there, and replaced the Spanish flag with The Stars and Stripes. He captured the two leading British operatives in Florida, Robert Armbrister and Alexander Arbuthnot. He had Armbrister shot;  Arbuthnot was hung from the yardarm of his own ship, the Chance.

Jackson proceeded on to seize Pensacola, the Spanish capitol, and at the end of May Jackson was in a position to notify President Monroe that he had taken northern Florida, quelled Indian resistance, routed the organized Negroes, deprived runaway slaves of their sanctuary, and brought British and Spanish influence in the region to an end.

Jackson returned to the US a hero to the people, but Secretary of War John C. Calhoun recommended his censure, and the House Committee on Military Affairs did the same.