Elizabeth Shoumatoff was terribly excited – the artist had made a reputation painting society portraits for the Frick, du Pont, Mellon, and Firestone families, and now she had been invited to Warm Springs, Georgia to paint President Franklin Delano Roosevelt’s portrait. 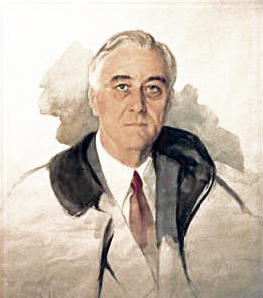 It was a clear spring day – President Roosevelt sat in his sunny living room with Lucy Mercer (with whom he had resumed an extramarital affair), two cousins and his dog Fala, signing papers while Elizabeth Shoumatoff got working on his portrait.  As lunchtime approached, Franklin said “We have fifteen minutes more to work.” A minute later he said “I have a terrific pain in the back of my head.”

The artist had a good portion of the portrait limned in, but “suddenly he raised his right hand and passed it over his forehead several times in a strange jerky way, without emitting a sound, his head bending slightly forward.” Moments later he was unconscious.

Confusion set in. One of the women summoned a doctor, who gave the president a shot of adrenaline into the heart in a vain attempt to revive him. Mercer and Shoumatoff quickly left the house.

Early in the afternoon she was informed that her husband had fainted. She left to make a speech, and when she returned later that afternoon her aides informed her of the president’s death. Anna, her daughter, soon arrived and the women changed into black dresses, and then Eleanor phoned their four sons who were all on active military duty.

At 5:30 pm, Vice President Harry Truman showed up. Eleanor said, “Harry, the president is dead.” Truman, who hadn’t heard the news, asked if there was anything he could do for her.

The First Lady replied, “Is there anything we can do for you? For you are the one in trouble now.”