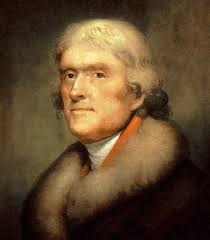 “Rightful liberty is unobstructed action according to our will within limits drawn around us by the equal rights of others. I do not add ‘within the limits of the law’ because law is often but the tyrant’s will, and always so when it violates the rights of the individual.”

“If the present Congress errs in too much talking, how can it be otherwise in a body to which the people send one hundred and fifty lawyers, whose trade it is to question everything, yield nothing, and talk by the hour?”

“Were it left to me to decide whether we should have a government without newspapers, or newspapers without a government, I should not hesitate a moment to prefer the latter.”

“I sincerely believe… that banking establishments are more dangerous than standing armies.”

“No occupation is so delightful to me as the culture of the earth, and no culture comparable to that of the garden.”

“In matters of style, swim with the current; in matters of principle, stand like a rock.”