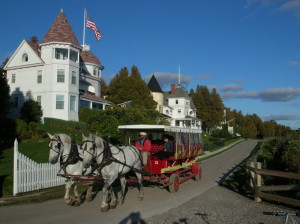 Mackinac Island is strategically situated on the Straits of Mackinac, the narrow body of water that separates Michigan’s Upper and Lower Peninsulas and connects Lake Huron with Lake Michigan. The French prized the site for its “chokepoint” location, but were forced to yield to the British.

During the Revolutionary War the British built Fort Mackinac on a 150-foot high bluff on the island with a commanding view of the straits. The British relinquished the fort to America in 1796, regained it during the War of 1812, and gave it up again in 1815. Fort Mackinac was garrisoned by the U.S. Army until the 1890s.

The island has unusual limestone formations, caves, old growth forests of pine, cedar, oak, and maple, and also wildflowers, dramatic bluffs, and gorgeous views of Lake Huron and the Straits of Mackinac.

Easily reached by Great Lakes steamers and with its pleasant breezy summers it became a popular resort after the Civil War.  By the late 1800s the island had several large hotels and a number of Victorian “cottages” built by wealthy summer residents.

U.S. Senator Thomas W. Ferry (1827-1896), whose parents ran the island’s mission school, was concerned that Mackinac Island would undergo unwelcome development that would ruin its character and slow paced lifestyle.  Not long after Yellowstone National Park was established in 1872, Ferry began gathering political support for making Mackinac Island a national park as well.

It was tough going for several years – Congress was loathe to spend money on parks and the island’s scenic and geologic attractions were not jaw-dropping wonders on a par with those of Yellowstone. Ferry finally prevailed, however, and Congress established Mackinac National Park with legislation that President Ulysses S. Grant signed into law on April 15, 1875.

With Fort Mackinac occupied by the army most of Mackinac Island was already federal property. Congress gave the park to the War Department to administer which meant that soldiers from the fort operated and policed the park.

Mackinac National Park lasted just 20 years.  In the 1890s the Army proposed to abandon Fort Mackinac, which would leave the park without a custodian.  Alarmed at the prospect, Michigan governor John T. Rich petitioned Congress to turn the park over to the state of Michigan.

In 1895 the park became Mackinac Island State Park, the first “state park” in the country. Automobiles were banned on the island in 1898, so Mackinac Island is still a special place to relax and spend time with the natural world.