The Boston Athletic Association, established in 1887, had built a fine clubhouse at the corner of Exeter and Blagden Streets, and had quickly become the leading athletic club in New England. 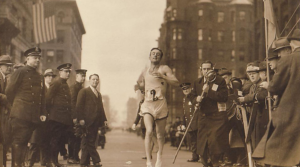 Athleticism was in vogue, and John Graham, coach and manager of the B.A.A. athletes, led a cohort from the club to compete at the first modern Olympic Games held in Athens in the summer of 1896. There they enthusiastically… observed the Marathon-to-Athens Race and returned to Boston with plans to sponsor a long-distance run the following spring.

With the assistance of Boston businessman Herbert H. Holton, various routes were plotted out. A measured distance of 24.5 miles from Metcalf’s Mill in Ashland to the Irvington Oval in Boston was finally selected. The race was called the “American Marathon” and scheduled for Patriot’s Day (April 19th) as the final event of the 1897 Boston Athletic Association Games.

Fifteen runners started the race but only 10 made it to the finish line. John J. McDermott, representing the Pastime Athletic Club of New York City, took the lead from Harvard athlete Dick Grant over the hills in Newton. Exhausted by the extended distance of the race McDermott slowed to a walk several times during the last miles, but he still won by almost seven minutes, in two hours, fifty-five minutes and ten seconds.

It took Larry Brignola, Harry Franklin, and AT Howe over four hours to complete the course – but they finished the race!