Like many other scrappy immigrant, when Alexander Hamilton set out from his homeland (the Caribbean island of Nevis), he made his way to New York City to make his mark on the world. 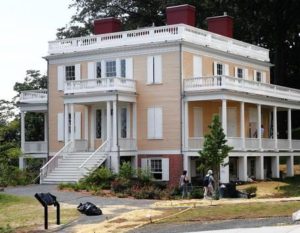 The illegitimate son of a hapless Scottish merchant and a mother of doubtful morals, Hamilton was brilliantly outspoken, prideful of his accomplishments, wary of human passions yet primed for confrontation. He was a man o…f the city – fascinated by debt and investment, by the expectations we should have of government, and the tension between democratic ideals and the practical management of affairs – he was everything that Thomas Jefferson was not.

It was only after considerable success in the law and government affairs, and many years of renting quarters about town, that Hamilton finally built a home of his own.

It was never as grand as Mt Vernon or Monticello, but it stood on a bluff overlooking the Hudson River in a part of northern Manhattan long since known as Hamilton Heights. It takes a bit of imagination today to envision the house standing alone atop a plot of land — a little over 32 acres — with expansive views of both the Hudson and Harlem Rivers from the house’s capacious windows and from the long piazzas that stretch along its sides, which lend its Federalist-style solidity a faint hint of the West Indies.

The Grange might have been Hamilton’s rivalrous answer to Jefferson, for though he was not the designer of his own home as Jefferson was, he was involved in every detail with John McComb Jr., who was also the architect for both Gracie Mansion and New York’s City Hall.

The house has been moved twice, first in 1889 as the Manhattan street grid was creeping north. Over time it became hemmed in by other buildings. Stripped of its porches and in disrepair; the National Park Service was given the house in 1962 on the condition that it be moved and renovated. Neighborhood opposition delayed the move until finally, in 2008, the house was mounted on hydraulic lifts and rolled on dollies around the corner to the north end of St. Nicholas Park, where it now sits.

Hamilton enjoyed his brief time at the Grange greatly. “A garden, you know,” he wrote in 1802 when the house was completed “is a very usual refuge of a disappointed politician.”