Just after Christmas of 1860, in the dark of night, Union Major Robert Anderson moved his men from Fort Moultrie on the South Carolina mainland to shield them from sniper attacks and the inevitable conflicts with civilians. 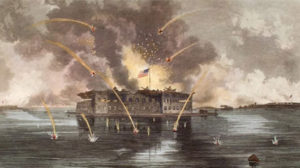 South Carolina had just seceded from the Union and tensions were high, and Anderson had no desire to further fan the flames. By shifting to the island or Fort Sumter, Anderson greatly reduced th…e potential for armed confrontation.

The Confederacy wasn’t officially organized until February 1861 in Montgomery, Ala., so there was no Confederate navy, and an attack seemed unlikely, but by April of 1861, the Confederacy had become more organized.

Captain Abner Doubleday (who was later credited with inventing baseball) waited until shortly before 7 a.m. for the advantage of daylight; then aimed a 32-pounder at the Ironclad Battery on Cumming’s Point, stepped back and yelled “Fire!” The Union’s reply, including Doubleday’s first shot, had little effect. For 34 hours, the Confederates directed more than 3,000 shells at Fort Sumter.

“The crashing of the shot, the bursting of the shells, the falling of the walls, and the roar of the flames, made a pandemonium of the fort,” Doubleday wrote the following day.

Miraculously, no one was killed or seriously wounded on either side. Anderson surrendered on April 13 and, the next day, Beauregard allowed Anderson to evacuate, rather than take Union prisoners.

The Battle of Fort Sumter was relatively brief, full of glory and mercifully bloodless. Everyone thought that the squabble between the States would be over soon.