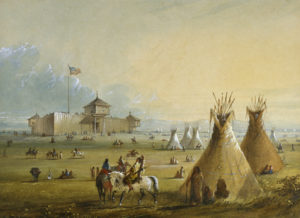 and North Platte Rivers in southeast Wyoming. Officially named Fort William, the post was rectangular, and measured only 100 by 80 feet. Hewn cottonwood logs 15 feet high formed the fort’s palisade. With the beaver trade already in decline, the future of the fur trade lay in trading with the Nativ…e population for buffalo robes. Fort William enjoyed a near monopoly on the buffalo trade in this region until a competing trading post, Fort Platte, was built a mile away in 1841. This rivalry spurred Fort William’s owners to replace their own aging fort with a larger, adobe walled structure named Fort John.

The Lakota traded tanned buffalo robes here for a variety of manufactured goods. Each spring caravans arrived with trade goods at the fort. In the fall, tons of buffalo hides and other furs were shipped east. Throughout the 1840’s, however, the take of buffalo robes declined and Fort John’s role changed. In 1841, the first of many westward-bound emigrants arrived at Fort John.
Tens of thousands of emigrants bound for Oregon, California, and the Salt Lake Valley would eventually stop at the fort. The traders at Fort John did a brisk seasonal business catering to the needs of emigrants.

In 1849, the U.S. Army purchased Fort John as part of a plan to establish a military presence along the emigrant trails. The post was officially renamed Fort Laramie, and it began its tenure as a military post. The Army quickly constructed new buildings for stables, officers’ and soldiers’ quarters, a bakery, a guardhouse, and a powder magazine to house and support the fort garrison.

As the years went by, the post continued to grow in size and importance. Fort Laramie soon became the principal military outpost on the Northern Plains. Fort Laramie also became the primary hub for transportation and communication through the central Rocky Mountain region as emigrant trails, stage lines, the Pony Express, and the transcontinental telegraph all passed through the post.

Fort Laramie played an important role hosting several treaty negotiations with the Northern Plains Indian Nations, the most famous of which were the Horse Creek Treaty of 1851 and the still contested Treaty of 1868.

When the Indian Wars came to a close Fort Laramie’s importance diminished. The post was abandoned and sold at public auction in 1890. Over the next 48 years, it nearly succumbed to the ravages of time. Preservation of the site was finally secured, however, when Fort Laramie became part of the National Park System.