May 2, 1924 — Craters of the Moon National Monument is established

The other-worldly landscape of the Craters of the Moon formed over eight different periods in the last 15,000 years, 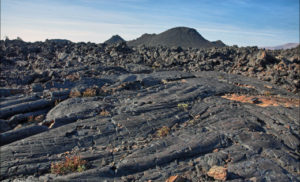 when lava erupted from the Great Rift, a series of deep cracks that stretch for 52 miles across Southern Idaho, and the Craters of the Moon lava field grew to cover 618 square miles.

During the 1983 Mount Borah earthquake (magnitude 6.9) the highest point in Idaho, Mount Borah, rose about a foot… and the Lost River Valley nearby dropped about 8 feet. The earth’s crust stretched along the Eastern Snake River Plain and released pressure on the hot rocks below, causing them to melt. It was this sort of seismic activity that allowed magma to travel to the surface along planes of weakness such as the Great Rift.

On August 22, 1969, Apollo 14 astronauts Alan Shepard, Edgar Mitchell, Joe Engle, and Eugene Cernan explored the landscape of the Craters of the Moon to learn the basics of volcanic geology in preparation for future trips to the moon.

The astronauts came to Craters of the Moon because NASA felt that these pilots might someday be walking on the moon where they would have the rare opportunity to collect scientifically valuable specimens of different rocks on the moon. Since only a limited amount of material could be brought back, and since much of the moon’s surface is covered by volcanic materials, it was very important that they know something volcanic landforms and rocks similar to those found on the lunar surface.

The places best suited to that purpose have reasonably fresh volcanic deposits and a variety of volcanic landforms not badly weathered or obscured by vegetation – a place like Crater of the Moon National Monument.

In 1999, Astronauts Cernan, Engle, and Mitchell (Shepard died in 1998) returned to Craters of the Moon to help celebrate the Monument’s 75th Anniversary, 30 years after training there, and reminisced about how knowing about what was “in their own backyard” prepared them so well for their missions to the moon.