Stephen Mather was born to a family of old New England stock, but he was a true son of the West. Born in California, he graduated from Berkeley, worked briefly as a reporter, and then got a job with the Pacific Coast Borax Company where he branded “20 Mule Team Borax” so successfully that it became a runaway success. 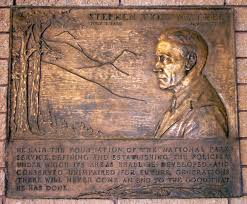 But in 1903 he suffered a nervous breakdown from overwork. During his illness his employer withheld his salary, so Mather quit and started a competing borax company. He soon became so rich that by the time he turned 47 he was a self-made millionaire and restless for a new challenge.

One of the highlights of Mather’s life thus far had been his meeting John Muir in Sequoia National Park in 1912. Mather found himself intoxicated by the wonders of nature, and visited Sequoia and Yosemite again in the summer of 1914 – But when he got there he was disgusted by the poor condition of the parks.

He wrote a letter of complaint to his college friend, Secretary of the Interior Franklin Lane.

Secretary Lane replied:
Dear Steve, If you don’t like the way the national parks are being run, come on down to Washington and run them yourself.

He took on staff, paid their salaries out of his own pocket, and began a public relations blitz. In 1915 spent $4,000 of his own money to lead a tour of influential leaders through Sequoia Park, Kern River Canyon and Mount Whitney for two weeks in July. All on the excursion fell under the spell of the rugged breath-taking scenery, particularly Gilbert H. Grosvenor, editor of the National Geographic Magazine, who became an enthusiastic supporter of the national parks.

Mather plied newspapers and magazines with park material, and between 1917 and 1919 his office inspired over 1,050 press articles. He raised funds from his wealthy friends to purchase new park lands, and at times he purchased land himself and donated it to the National Park Service.

He engaged the budding automotive industry to help “democratize” the parks, working to increase their accessibility to ordinary Americans, and he professionalized the corps of park rangers.

There were times when Steve Mather still suffered from depression, but, as so many have found, the wilderness protected by the National Parks provided a welcome tonic, and time with nature helped ward off his bouts of melancholy.

Stephen Mather is not well remembered today, but upon his death in 1930 the Park Service erected bronze plaques in each National Park engraved with his image and the words: “There will never come an end to the good that he has done.”