May 17, 1864: James Conness proposes the Yosemite Bill to in Congress

The Army of the Potomac was still licking its wounds from the bloody Battle of the Wilderness, and the first soldiers were just being buried at Arlington National Cemetery.

It wasn’t a time to think about parks. 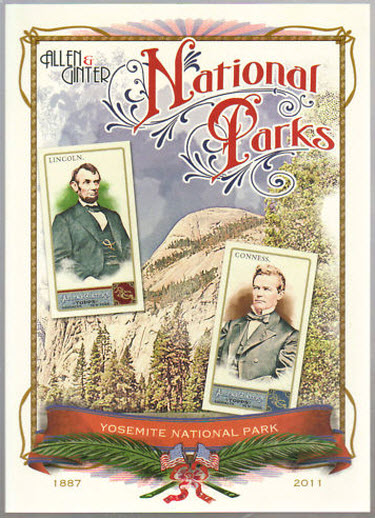 But on this day in the middle of the Civil War, Senator John Conness from California introduced a bill to Congress which proposed to set aside the Yosemite Valley and the Mariposa Grove for the future enjoyment of everyone.

A little over a month later, on June 30, 1864, President Abraham Lincoln signed an act to preserve forever these beautiful sights he had never seen, thousands of miles away in California.

Frederick Law Olmstead was put in charge of developing Yosemite Park. “It was during one of the darkest hours,” Olmsted wrote, “before Sherman had begun the march upon Atlanta, when the paintings of Bierstadt and the photographs of Watkins, both productions of the war time, had given to the people on the Atlantic some idea of the sublimity of the Yosemite.”

There may have been some political debts being repaid as well. Thomas Starr King. King, a Unitarian minister in San Francisco, was a great champion of the Yosemite Valley, and also an unwavering supporter of the Union. He helped to raise over a million dollars for wounded Union soldiers and the Lincoln administration was beholden to King and other California friends of Yosemite for their financial contributions to the war effort.

Also, the Yosemite Bill proposed something that wasn’t politically possible prior to secession. Senator Jefferson Davis of Mississippi had consistently asserted that the national government had absolutely no authority muddling with land grants and if it did the government would be “warped so far from the path it had previously followed.”

By 1864, Lincoln and the wartime Congress realized that the political landscape would never return to its pre-war status quo. With this in mind, Lincoln began to fundamentally redefine and expand the role of government to include intervention in public education, transportation, and agriculture, and to increase its commitment to freedom.

As Frederick Law Olmsted acknowledged, the Yosemite Grant did not stand apart from the Union war effort; rather, it reflected how the war was changing the role and expectations of the national government.

In his Gettysburg Address Lincoln had promised a war-weary nation “a new birth of freedom.” When Olmsted was appointed to draft a charter and plan for Yosemite, he expanded upon Lincoln’s vision, and made the case that it is a “political duty” of republican government to set aside “great public grounds for the free enjoyment of the people.”

It was an acknowledgement that the ideals of the Declaration of Independence included not just “life” and “liberty”, but also “the pursuit of happiness.”