If the pursuit of learning is not defended by the educated citizen, it will not be defended at all. For there will always be those who scoff at intellectuals, who cry out against research, who seek to limit our educational system. Modern cynics 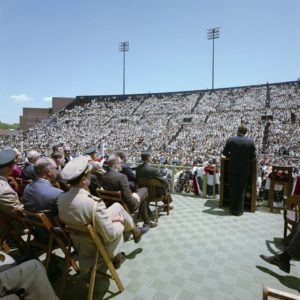 But the educated citizen knows how much more there is to know. He knows that “knowledge is power,” more so today than ever before. He knows that only an educated and informed people will be a free people, that the ignorance of one voter in a democracy impairs the security of all, and that if we can, as Jefferson put it, “enlighten the people generally … tyranny and the oppressions of mind and body will vanish, like evil spirits at the dawn of day.”

And, therefore, the educated citizen has a special obligation to encourage the pursuit of learning, to promote exploration of the unknown, to preserve the freedom of inquiry, to support the advancement of research, and to assist at every level of government the improvement of education for all Americans, from grade school to graduate school.

Secondly, the educated citizen has an obligation to serve the public. He may be a precinct worker or President. He may give his talents at the courthouse, the State house, the White House. He may be a civil servant or a Senator, a candidate or a campaign worker, a winner or a loser. But he must be a participant and not a spectator.

“At the Olympic games,” Aristotle wrote, “it is not the finest and strongest men who are crowned, but they who enter the lists-for out of these the prize-men are elected. So, too, in life, of the honorable and the good, it is they who act who rightly win the prizes.”