May 19, 1856: Charles Sumner delivers “The Crime Against Kansas” speech

It was one of those hot May days in Washington, and the Old Senate Chamber was packed well beyond capacity. The temperature had reached 90 degrees by the afternoon session when Massachusetts Senator Charles Sumner rose to speak. 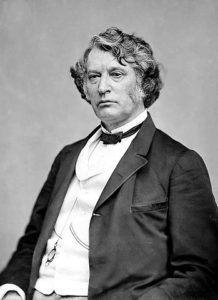 Sumner stood six-foot, two-inch tall; he was broad-chested, and bombastic, and, at a time when m…ost senators dressed in black frock coats, Sumner favored light-colored English tweed coats and lavender trousers. He was Harvard educated, highly cultured, and he knew that he was brilliant. His literary style was florid and rife with detail, allusion, and quotations from the classic orators of Greece and Rome. His best friend Henry Wadsworth Longfellow declared he delivered speeches “like a cannoneer ramming down cartridges”, while Sumner himself admitted that “you might as well look for a joke in the Book of Revelation.”

The freshman senator had been planning this speech for months, and had carefully written every word out in longhand and had commissioned an advance printed edition—112 pages long. By the time he entered the chamber on May 19, he had memorized every word of the address he entitled “The Crime Against Kansas.”

He adopted the tone of an erudite classical scholar lecturing slow-witted children and spoke for five hours over two days. The Boston Brahmin particularly singled out two Democratic senators for insult – Stephen A. Douglas of Illinois – “a noise-some, squat, and nameless animal . . . not a proper model for an American senator” – and Andrew Butler of South Carolina – who had taken “a mistress . . . who, though ugly to others, is always lovely to him; though polluted in the sight of the world, is chaste in his sight—I mean,” added Sumner, “the harlot, Slavery.”

Radical Abolitionists across the north hailed his tour-de-force performance.

Two days later, after the Senate had adjourned for the day, Sumner sat at his desk signing his postal frank to envelopes containing the printed speech. Representative Preston Brooks of South Carolina, who was Senator Butler’s cousin, entered the old chamber carrying a gutta-percha cane of the type often used to discipline unruly dogs.

Moving quickly, Brooks slammed his metal-topped cane onto the unsuspecting Sumner’s head. Sumner was trapped by his heavy desk which was bolted to the floor and could not escape. Brooks continued striking him about the head until Sumner ripped his desk from the floor, and blinded by his own blood, staggered up the aisle and collapsed. Brooks continued to beat the motionless Sumner until his cane broke.

Bleeding profusely, Charles Sumner was carried away. Preston Brooks walked calmly out of the chamber without being detained.