Very low thunder-clouds and showers far in the north at sunset, the wind of which, though not very strong, has cooled the air. Saw the lightning, but could not hear the thunder. I saw in the northwest first rise, in the rose-tinted horizon sky, a dark, narrow, craggy cloud, narrow and projecting as no cloud on earth, seen against the rose-tinged sky, – the 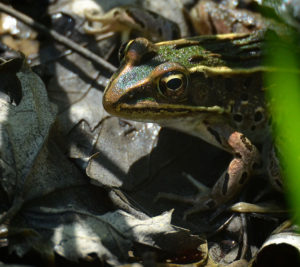 crest of a thunder-storm, beautiful and grand. The steadily increasing sound of toads and frogs along the river with each successive warmer night is one of the most important peculiarities of the season. Their prevalence and loudness is in proportion to the increased temperature of the day. It is the first earth-song, beginning with the croakers, (the cricket’s not yet), as if the very meads at last burst into a meadowy song. I hear a few bullfrogs and but few hylodes. Methinks we always have at this time those washing winds as now, when the choke-berry is in bloom – bright and breezy days blowing off some apple blossoms.