As U.S. soldiers proceeded with rounding up Cherokees, Indian missionary Daniel S. Buttrick, who would accompany the Cherokees on the Trail of Tears, wrote from Brainard just north of the Georgia-Tennessee line: 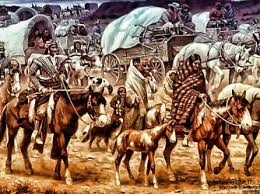 “In Georgia there were supposed to be about 8000 Cherokees. These, in general, were taken just as they were found by the soldiers, without permission to stop either for friends or property.

As the soldiers advanced towards an Indian house, two little children fled in flight to the woods. The woman pleaded for permission to seek them or wait till they came in, giving positive assurances that she would then follow on and join the company.
But all entreaties were vain, and it was not till a day or two after that she could get permission for one of her friends to go back after the lost children! A man, deaf and dumb, being surprised at the approach of armed men, attempted to make his escape and, because he did not hear and obey the command of his pursuers, was shot dead on the spot! … Women absent from their families on visits or for other purposes were seized, and men far from their wives and children were not allowed to return, and also children being far from home were dragged off among strangers. Cattle, horses, hogs, household furniture, clothing and money not with them when taken were left. And it is said that the white inhabitants around stood with open arms to seize whatever property they could put their hands on… .

Thus in two or three days about 8000 people, many of where were in good circumstances and some rich, were rendered homeless, houseless and penniless and exposed to all the ills of captivity… . Those taken to the post at New Echota [Georgia] were confined day and night in the open air with but little clothing to cover them when lying on the naked ground.”