May 30, 1806: Andrew Jackson Kills Charles Dickinson in a Duel

Charles Dickinson didn’t think much of Andrew Jackson. They were rivals horse breeders and plantation owners and 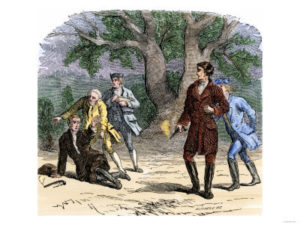 Dickinson was sure Jackson had reneged on a bet and everyone knew that Rachel Jackson hadn’t gotten a true divorce before marrying Andrew, and he didn’t mind publishing a statement in the National Review calling Jackson a w…orthless scoundrel and a coward.

Andrew Jackson didn’t take a lot of guff and he didn’t have many choices; he challenged Dickinson to a duel.

As dueling was illegal in Tennessee, the two Tennessee men traveled to Harrison’s Mills on the bank of the Red River in Logan, Kentucky to settle their score. On the appointed day they took their positions 24 feet apart. A matched set of .70 caliber dueling pistols was presented and each man chose his weapon.

General John Overton then announced the duel should begin.

Squaring himself, Dickinson aimed and quickly fired at Jackson’s heart. He knew that he had aimed well, but despite smoke and dust billowing from Jackson’s coat – and his hand touching his chest, Jackson remained standing.

“My God! Have I missed him?” Dickinson called out.

He hadn’t missed – the shot had broken two of Jackson’s ribs and lodged inches from his heart, but that wasn’t enough to knock him down, and now the decorum of dueling required that Dickinson remained in place while Jackson patiently aimed to take his shot.
Jackson pulled the trigger, but the flint hammer stopped half-cocked.

The shot was good and the bullet hit Dickinson in the chest.
Dickinson would succumb to his wounds, dying later that night.

Andrew Jackson survived and went on to fight another day.

Reflecting on the duel, the doctor who treated Jackson remarked, “I don’t see how you stayed on your feet after that wound.” To which Jackson responded, “I would have stood up long enough to kill him if he had put a bullet in my brain.”