On a cold December day in 1888 a couple of ranchers in southwest Colorado stumbled upon a spectacular sight: a series of ancient stone villages nestled in protective, overhanging alcoves under the steep cliffs at Mesa Verde. 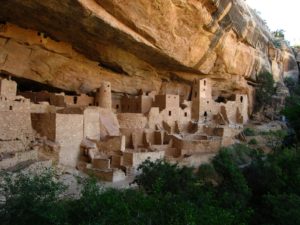 This encounter by members of the Wetherill family, who ranched along the Mancos River and pastured their cattle near the mesa, set off  a decades long pursuit of Mesa Verde’s antiquities, a  bonanza which would significantly augment the income from their struggling ranch.

Richard Wetherill, working with family and friends, collected and sold pottery and artifacts while guiding tourists from his ranch to the awe-inspiring sites. In July 1891, he hosted Gustav Nordenskiold, a young, Swedish-Finnish nobleman who was eager to learn about Mesa Verde. Nordenskiold excavated sites on the mesa with some professionalism, and retrieved a trove of artifacts which he sent to Durango to be shipped back to his home in Sweden.

The railroad, responding to local and statewide outrage, refused to handle them. A confrontation broke out, centering directly on the impropriety of removing archeological artifacts from public lands and shipping them out of the country.

After a brief legal skirmish, it became clear that there was no state or federal statute prohibiting the removal of archeological properties from public land. Legally, these artifacts could be shipped anywhere, and they were eventually placed in the Finnish National Museum in Helsinki.

Two decades of looting, desecration, and destruction of Native American sites in the Southwest such as Chaco Canyon and Cliff Palace ensued.

Congressman John Lacey of Iowa usually carried on his congressional work without fanfare, and he received no great public exposure or acclaim through his speeches or writings. He had none of the rough-and ready ways of Theodore Roosevelt.

But Congressman Lacey possessed a kind of low-keyed, yet decided, interest in nature, and wrote with strong feelings about landscapes, plants, animals, and the natural world. With his long-time commitment to protecting the natural world, and with his legal knowledge and political acumen, he was able to help transform the landscape of our country.

He sought to protect lands were “for their scenic beauty, natural wonders or curiosities, ancient ruins or relics, or other objects of scientific or historic interest, or springs of medicinal or other properties.”

He proposed a bill which would authorize the Secretary of the Interior to establish a “service” to manage and care for the protected areas. This service was to make certain that the reserves remain essentially unimpaired: It would ensure the “preservation from injury or spoliation of any and all objects therein of interest or value to science or history.” And, recognizing the tourism potential of the reserves, the bill authorized the service to provide for the “accommodation of visitors.” And to protect the reserves’ scientific knowledge base, Lacey’s bill called for a research permitting process, plus penalties for vandals and looters

The Lacey Act – also known as the Antiquities Act of 1906 – was a decade in the making. On June 8, 1906, President Theodore Roosevelt signed the bill, which set aside “historic landmarks, historic and prehistoric structures, and other objects of historic or scientific interest” in order to stop their destruction. As the Antiquities Act provided, either the President or Congress could establish national monuments.

President Roosevelt wasted no time in taking advantage of the authority given him by the bill.

The lands initially set aside as “national monuments” under the Antiquities Act comprise more than 50 percent of today’s national park system, and include seven World Heritage sites.