I have… chosen this time and place to discuss a topic on which ignorance too often abounds and the truth too rarely perceived — and that is the most important topic on earth: peace. 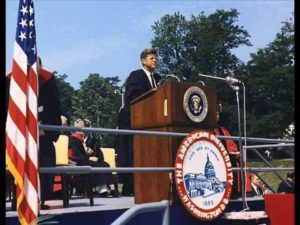 What kind of peace do I mean and what kind of a peace do we seek? Not a Pax Americana enforced on the world by American weapons of war, not the peace of the grave or the security of the slave. I am talking about genuine peace — the kind of peace that makes life on earth worth living — and the kind that enables men and nations to grow and to hope and build a better life for their children — not merely peace for Americans but peace for all men and women — not merely peace in our time but peace in all time.

Today the expenditure of billions of dollars every year on weapons acquired for the purpose of making sure we never need them is essential to the keeping of peace. But surely the acquisition of such idle stockpiles — which can only destroy and never create — is not the only, much less the most efficient, means of assuring peace.

I speak of peace, therefore, as the necessary rational end of rational men. I realize the pursuit of peace is not as dramatic as the pursuit of war — and frequently the words of the pursuers fall on deaf ears. But we have no more urgent task.

Some say that it is useless to speak of peace or world law or world disarmament — and that it will be useless until the leaders of the Soviet Union adopt a more enlightened attitude. I hope they do. I believe we can help them do it.

But I also believe that we must re-examine our own attitudes — as individuals and as a nation — for our attitude is as essential as theirs. And every graduate of this school, every thoughtful citizen who despairs of war and wishes to bring peace, should begin by looking inward — by examining his own attitude towards the possibilities of peace, towards the Soviet Union, towards the course of the cold war and towards freedom and peace here at home.

First: Examine our attitude towards peace itself. Too many of us think it is impossible. Too many think it is unreal. But that is a dangerous, defeatist belief. It leads to the conclusion that war is inevitable — that mankind is doomed — that we are gripped by forces we cannot control.

We need not accept that view. Our problems are man-made. Therefore, they can be solved by man. And man can be as big as he wants. No problem of human destiny is beyond human beings. Man’s reason and spirit have often solved the seemingly unsolvable — and we believe they can do it again.

I am not referring to the absolute, infinite concepts of universal peace and goodwill of which some fantasies and fanatics dream. I do not deny the value of hopes and dreams but we merely invite discouragement and incredulity by making that our only and immediate goal.

Let us focus instead on a more practical, more attainable peace — based not on a sudden revolution in human nature but on a gradual evolution in human institutions — on a series of concrete actions and effective agreement which are in the interests of all concerned.

There is no single, simple key to this peace — no grand or magic formula to be adopted by one or two powers. Genuine peace must be the product of many nations, the sum of many acts. It must be dynamic, not static, changing to meet the challenge of each new generation. For peace is a process — a way of solving problems.

With such a peace, there will still be quarrels and conflicting interests, as there are within families and nations. World peace, like community peace, does not require that each man love his neighbor — it requires only that they live together with mutual tolerance, submitting their disputes to a just and peaceful settlement. And history teaches us that enmities between nations, as between individuals, do not last forever. However fixed our likes and dislikes may seem, the tide of time and events will often bring surprising changes in the relations between nations and neighbors.