We were having our literary exercises on Friday afternoon, at our Seminary, when the cry reached our ears. Rushing to the door, and standing on the front portico we beheld in the direction of the Theological Seminary, a dark, dense mass, moving toward town. 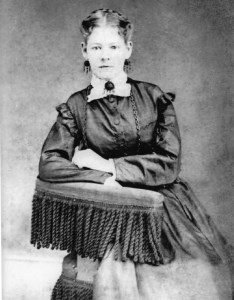 Our teacher, Mrs. Eyster, at once said:
‘Children, run home as quickly as you can.’

It did not require repeating. I am satisfied some of the girls did not reach their homes before the Rebels were in the streets.

As for myself, I had scarcely reached the front door, when, on looking up the street, I saw some of the men on horseback. I scrambled in, slammed shut the door, and hastening to the sitting room, peeped out between the shutters.

What a horrible sight! There they were, human beings! Clad almost in rags, covered with dust, riding wildly, pell-mell down the hill toward our home! Shouting, yelling most unearthly, cursing, brandishing their revolvers, and firing right and left. I was fully persuaded that the Rebels had actually come at last. What they would do with us was a fearful question to my young mind.

Soon the town was filled with infantry, and then the searching and ransacking began in earnest. They wanted horses, clothing, anything and almost everything they could conveniently carry away.

Nor were they particular about asking. Whatever suited them they took. They did, however, make a formal demand of the town authorities, for a large supply of flour, meat, groceries, shoes, hats and (doubtless, not least in their estimations), ten barrels of whisky; or, in lieu of this five thousand dollars.

But our merchants and bankers had too often heard of their coming, and had already shipped their wealth to places of safety. Thus it was, that a few days after, the citizens of York were compelled to make up our proportion of the Rebel requisition.”