July 13 1832: Henry Schoolcraft discovers the Source of the Mississippi

We ascended the river in our canoes ten miles farther, to a little lake, (Usaw-way, or Perch lake,) about two miles long and half a mile broad; the river was very narrow and crooked, through a low, narrow meadow, and a little above this lake we left it; seeing that we had now traced this smaller branch of the Mississippi into the very swamps and meadows, from the drainage of which it takes its rise. 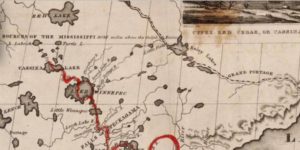 From here we set off, over land, in a southwest direction, to reach Lac La Biche, represented as the source of the larger branch. Our canoes and baggage being very light, all was transported at one load, one man carrying the canoe, and the other the baggage of each of the party. In this way we made a portage of six miles in four hours, and struck the lake, the object of our search, near the end of its southeastern bay. The first mile of the portage was through a tamrack swamp, and the remainder, excepting a little lake of 300 yards diameter, was over pine ridges of the poorest character imaginable. The soil was almost pure sand, and the pine was stunted and mostly of the scrub species, (pinus banksianus,) which, hung as it was with lichens, and no other growth, not even a bush or shrub, mixed with it, presented a picture of landscape more dismal and gloomy than any other part of this miserably poor country that we had seen. Not a bird or animal, scarce even a fly, was to be seen in the whole distance of this portage, and it would seem that no kind of animal life was adapted to so gloomy a region.

From these hills, which were seldom more than two or three hundred feet high, we came suddenly down to the lake, and we embarked and passed nearly through it to an island, near its west end, where we remained one or two hours.

We were now sure that we had reached the true source of the great river, and a feeling of great satisfaction was manifested by all the party; Mr. Schoolcraft hoisted a flag on a high staff, on the island, and left it flying.

Lac La Biche is about seven miles long, and from one to three broad, but is of an irregular shape, conforming to the bases of pine hills, which, for a great part of its circumference, rise abruptly from its shore. It is deep, and very clear and cold, and seemed to be well stocked with fish. Its shores show some boulders of primitive rock, but no rock in place, and are generally skirted near the water with bushes. The island, the only one of the lake, and which I have called Schoolcraft island, is one hundred and fifty yards long, fifty yards broad, and twenty or thirty feet elevated in its highest part; a little rocky in boulders, and grown over with pine, spruce, wild cherry, and elm.

There can be no doubt but that this is the true source and fountain of the longest and largest branch of the Mississippi. All our information that we had been able to collect on the way, from traders and Indians, pointed to it as such; and our principal Indian guide, Yellow Head, who has proved to us his close intelligence of the country, represents the same. He has formerly hunted all around it, and says there is a little creek, too small for even our little canoes to ascend, emptying into the south bay of the lake, and having its source at the base of a chain of high hills, which we could see, not two miles off, and that this is the only stream of any description running into it. In fact, the whole country showed that there was no stream beyond, for the lake was shut in on all sides by pine hills, and the only opening through them was that by which it discharged itself. ….

We left Lac La Biche, from its northern bay, having coasted nearly its whole circumference, and found the Mississippi, at its very egress from the lake, a respectable stream; its channel being twenty feet broad and two feet deep, and current two miles per hour. Its course was northwest and soon ran through a chain of high pine hills, where the channel contracted very much, and numerous rapids occurred of very great fall over boulders of primitive rock; the river running, for the distance, in a deep ravine. We descended twenty-five miles, and encamped.