TO THE INHABITANTS OF CALIFORNIA

The central government of Mexico having commenced hostilities against the United States of America, by invading its 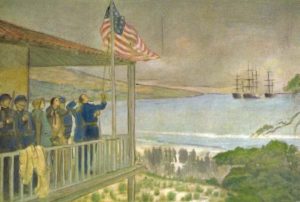 territory and attacking the troops of the United States stationed on the north side of the Rio Grande, and with a force of seven thousand men, under the command of General Arista, which army was totally destroyed and all their artillery, baggage, &c., captured on the 8th and 9th of May last, by a force of two thousand three hundred men, under the command of General Taylor, and the city of Matamoras taken and occupied by the forces of the United States; and the two nations being actually at war by this transaction, I shall hoist the standard of the United States at Monterey immediately, and shall carry it throughout California.

I declare to the inhabitants of California, that although I come in arms with a powerful force, I do not come among them as an enemy to California; on the contrary, I come as their best friend – as henceforward California will be a portion of the United States, and its peaceable inhabitants will enjoy the same rights and privileges they now enjoy; together with the privileges of choosing their own magistrates and other officers for the administration of justice among themselves, and the same protection will be extended to them as to any other State in the Union.

They will also enjoy a permanent government under which life, property and the constitutional right and lawful security to worship the Creator in the way most congenial to each one’s sense of duty will be secured, which unfortunately the central government of Mexico cannot afford them, destroyed as her resources are by internal factions and corrupt officers, who create constant revolutions to promote their own interests and to oppress the people.

Under the flag of the United States California will be free from all such troubles and expense, consequently the country will rapidly advance and improve both in agriculture and commerce; as of course the revenue laws will be the same in California as in all other parts of the United States, affording them all manufactures and produce of the United States, free of any duty, and all foreign goods at one quarter of the duty they now pay, a great increase in the value of real estate and the products of California may also be anticipated.

With the great interest and kind feelings I know the government and people of the United States possess towards the citizens of California, the country cannot but improve more rapidly than any other on the continent of America. Such of the inhabitants of California, whether natives or foreigners, as may not be disposed to accept the high privileges of citizenship, and to live peaceably under the government of the United States, will be allowed time to dispose of their property and to remove out of the country, if they choose, without any restriction, or remain in it, observing strict neutrality.

With full confidence in the honor and integrity of the inhabitants of the country, I invite the judges, alcaldes, and other civil officers, to retain their offices and to execute their functions as heretofore, that the public tranquility may not be disturbed; at least, until the government of the territory can be more definitely arranged.
All persons holding titles to real estate, or in quiet possession of lands under a color of right, shall have those titles and rights guarantied to them.

All churches, and the property they contain, in possession of the clergy of California, shall continue in the same rights and possessions they now enjoy.

All provisions and supplies of every kind, furnished by the inhabitants for the use of United States ships and soldiers, will be paid for at fair rates, and no private property will be taken for public use without just compensation at the moment.